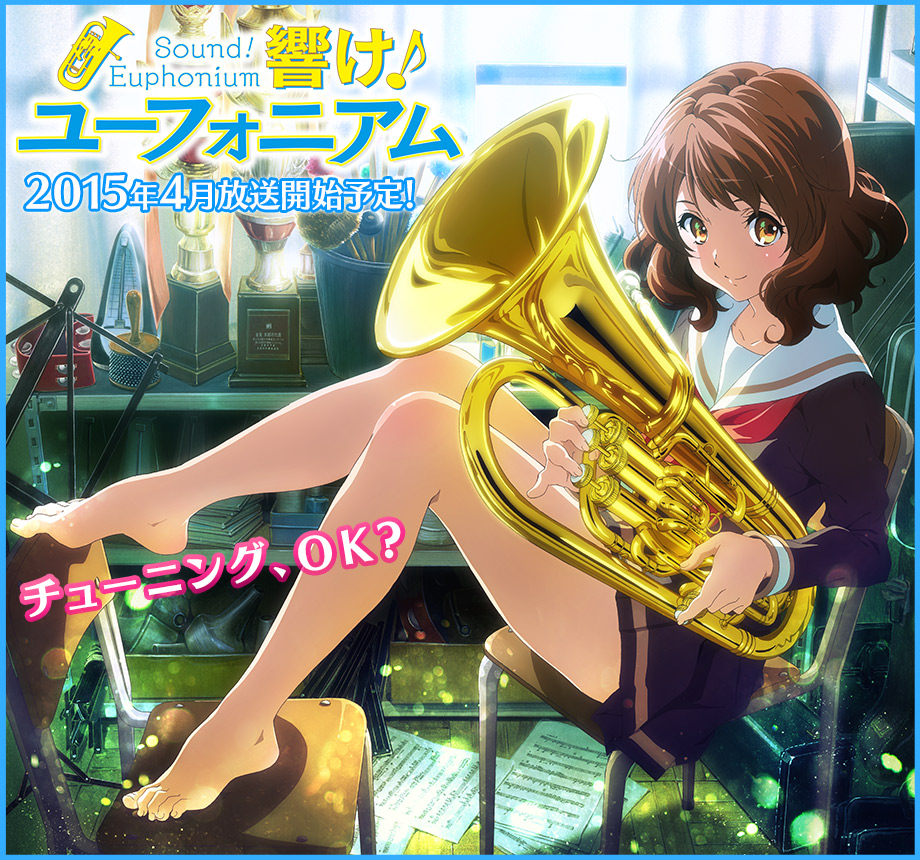 If you don’t read manga or light novels, and just watch anime like me, you’re probably wondering what Kyoto Animation had in store for Hibike! Euphonium. K-On! is one of the most popular, if not the most popular, Kyoto Animation work, and regarded as one of the best by the Japanese. I was also a huge fan of K-On!, and I still am to this day. It is the anime I can always go back to whenever I want and it never gets boring for me to watch. K-On! was just a fun anime, and I liked how the characters interacted with each other. You got this real sense of how this how true friends should be. In this way, the music was a side part of the anime, only really used as the way to keep the five of them together. In this way, some people were annoyed with K-On!, since music should have been the main focus. Will KyoAni retread K-On!‘s popularity and recreate the same thing?

The story of Hibike! Euphonium begins with Kumiko Oumae. She is a euphonium player who has just finished graduating from middle school. After her school’s ensemble failed to make Nationals, she blurts out to her fellow bandmate, Reina Kousaka, that they weren’t cut out for Nationals anyway, and that upsets Reina. Come high school, Kumiko is thinking about whether or not she should return to a school ensemble. When the new friends she meets, Sapphire Kawashima and Hazuki Katou, decide to sign up for the school ensemble, Kumiko tags along. When she arrives, she discovers Reina has also signed up, and Kumiko has yet to make up with Reina over what she said back in middle school. The anime so far follows Kumiko’s band practices and her school life as she tries to make up with Reina over her past.

Even though K-On! and Hibike! Euphonium are both done by Kyoto Animation, there are a lot of differences between the two. Take everything you know about K-On!, flip it around, and you have Hibike! Euphonium. It’s a way more serious music anime with characters that are not buddy-buddy right off the bat, and they actually take their club activities seriously. Unlike K-On!, there’s a clear goal in mind for the characters, and they have to work hard towards that goal. Even the advisers for K-On! and Hibike! Euphonium are complete opposites. Sawako from K-On!, while occasionally giving a hand in the club, messed around a lot during her time as adviser. Taki-sensei from Hibike! Euphonium on the other hand, isn’t afraid to chew out those he thinks are not doing their work properly. They’re anime on two opposite ends when it comes to how they present the music side of their stories. Music is the main focus of Hibike! Euphonium, with the characters taking a side role.

Speaking of the characters, we’ve got an interesting cast of characters. While Sapphire and Hazuki are your standard character archetypes you see everywhere in anime, Kumiko is a little different. She’s cynical and a realist, and often says what’s on her mind before she really thinks it through. She’s not the type of character that is usually seen in anime, especially not in KyoAni’s work. Personally, one of my favourite characters is one of the seniors in the band, Asuka Tanaka. She’s a real oddball, and she’s fun to watch. She helped make the first couple of episodes enjoyable before they got into the real meat of the story.

As I’ve mentioned plenty of times before, Kyoto Animation’s works rank among some of the best looking in anime. They’re certainly not going to break tradition now. The animation is nice and smooth, and the characters and backgrounds are drawn with a very high level of detail. The anime looks like any other Kyoto Animation anime; their style is very distinctive. Their style focuses a lot on colour, and making their characters look as cute as humanly possible.

Sound-wise, as a music anime, there’s a few good tracks in there. The OP and ED are good as usual from KyoAni, and the anime also makes use of classic orchestral works like “From the New World” (Symphony No.9 in E minor) by Dvorak, as the music they play in their ensemble. It works well, and it’s enjoyable to listen to some classical music. KyoAni usually hires rookies to do their main characters, and they do it again Hibike! Euphonium. Chika Anzai (Chaika from Hitsugi no Chaika) as Reina Kousaka, and Tomoyo Kurosawa (Tina Sprout from Black Bullet) as Kumiko Oumae are the two out of the main cast with the most experience.  So far, most of them work for their appropriate roles, but I don’t think it’s anything special yet. A side note: Minako Kotobuki (Tsumugi Kotobuki from K-On!) voices Asuka Tanaka. So she’s voicing both series’ oddball characters huh…? 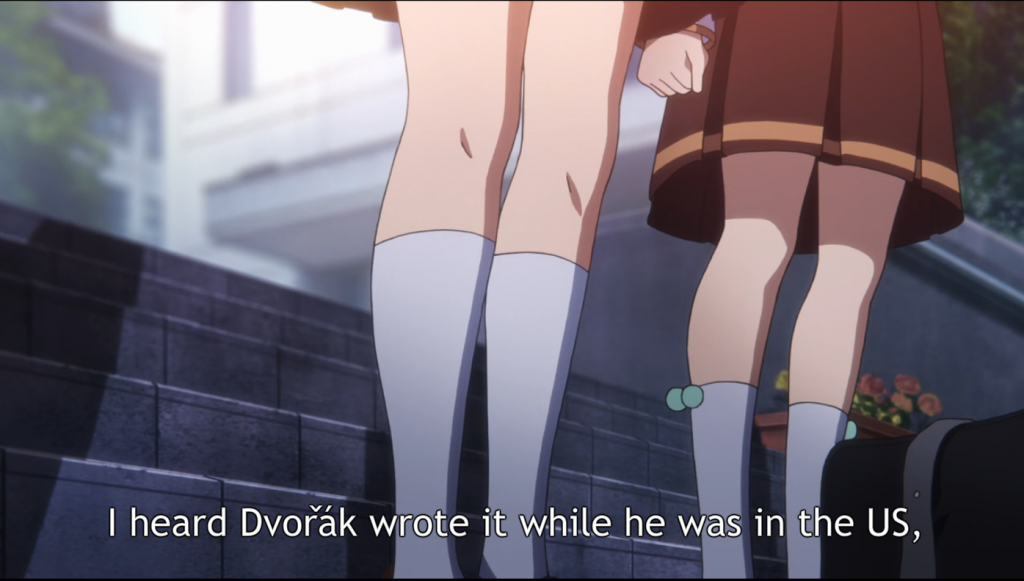 Right now, Hibike! Euphonium is a fun watch, and it is different from K-On! If you weren’t happy with K-On!‘s style of showing off music, you will most likely be happy with what direction Hibike! Euphonium is going. It’s an anime with more substance and less fluff, and it’s fairly easy to get into especially if you’re a musician. The anime doesn’t have a specified length yet, but Kyoto Animation hasn’t done a 2-cour anime since Hyouka. Sure they’ve done two seasons (Chuunibyou, and Free) but that’s it. It wouldn’t surprise me if Hibike! Euphonium is also 1-cour, with a second season if it does well enough.

What do you guys think of Hibike! Euphonium? Let me know in the comments!