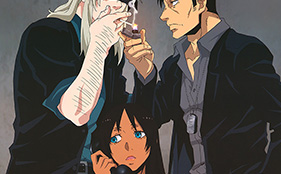 The official website for the Gangsta. television anime series announced on Thursday that the anime’s DVD and Blu-ray Disc releases in Japan are being postponed, starting with the third volume release. The third volume was slated to ship on November 26. The committee announced that once it makes a decision regarding the new release dates, it will reveal the dates on the show’s homepage and on its official Twitter account. The committee apologized to fans who were looking forward to the release.

The committee released the anime’s first DVD and Blu-ray Disc on September 25, and will release the second volume on October 28. There are six volume releases planned for the 12-episode series.

Manglobe, the studio that animated the series, filed for bankruptcy on September 29.

In addition to this, the series has recently been featured as a poster in the October 2015 issue of the Japanese anime magazine Animedia with Worick Arcangelo, Nicholas Brown and Alex Benedetto in the new illustration.