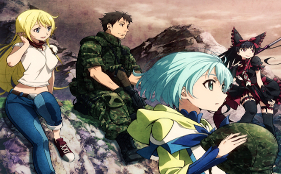 It has been revealed that the 12th and final episode of the GATE (Gate: Jieitai Kanochi nite, Kaku Tatakaeri) anime announced on Saturday that the series will continue with a second cour (quarter of the year) in January, 2016. The second cour will cover the “Flame Dragon Arc.”