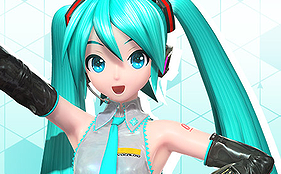 At Game Party Japan 2016 – or as it’s better known, Tokaigi – the first footage for the next entry in the highly successful Project Diva rhythm-game series was unveiled on Japanese streaming site Niconico. Originally released as an arcade-exclusive under the name Hatsune Miku: Project Diva Arcade Future Tone, this edition of Future Tone will port over the paragon of Japanese pop-culture over to PlayStation 4.

Among the three songs that were showed off during a demonstration, hosted by publisher Sega, were Junky’s “Sweet Magic,” tilt-six’s “Electro Saturator,” and livetune’s “Decorator.”

Although digital-only Japanese releases tend to be difficult to import, it would be surprising to see Sega decide to not localize Future Tone – what with Hatsune Miku: Project Diva F 2nd netting a modest 109,000 units sold in the US. However, Sega could decide to skip Future Tone in favor for the flashier, newer title Hatsune Miku: Project Diva X given the fact that both of them will be releasing within the same year, perhaps making the market surrounding Project Diva crowded in North America.

With Hatsune Miku: Project Diva X launching in Japan on March 24th for the PlayStation Vita and a 226 song list, there’s plenty of soak in if you’re a fan of the undoubtedly explosive, adorable Vocaloid characters – such as Hatsune Miku, Megurine Luka, and the Kagamine twins – and the equally stellar music that is produced from its expansive community.

Hatsune Miku: Project Diva Future Tone is expected to release in Japan in spring 2016 as a digital-only PlayStation 4 exclusive.