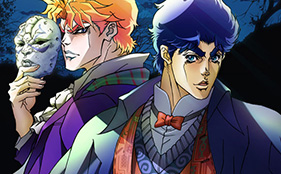 During the Anime Expo 2015 event, a presentation of the upcoming English dub of the 2012 anime adaptation of Hirohiko Araki’s JoJo’s Bizarre Adventure was revealed. This clip contains the audio recorded from the panel which previewed episodes 3 and 10 from season one of JoJo’s Bizarre Adventure with the Japanese Blu-ray release of the anime. The dub will be bundled with the first volume of the North American release of the anime, containing the entire first season. The dub will star Johnny Yong Bosch (Lelouch Lamperouge from Code Geass) as Jonathan Joestar, Patrick Seitz (Laxus Dreyar in Fairy Tail) as Dio Brando, Ben Diskin (Kai Miyagusuku from Blood+) as Joseph Joestar, Bryce Papenbrook (Masaomi Kida from Durarara!!) as Caesar and Robbie Daymond (Mamoru Chiba from Sailor Moon) as Smokey.

The first season of JoJo’s Bizarre Adventure will  be available on DVD on September 22nd, containing the English and Japanese dub. It currently listed at a sale price of $39.99 (retails at $49.95) on RightStuff.