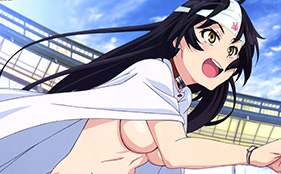 A new visual featuring Ayame Kajou from the anime adaptation of Hirotaka Akagi’s Shimoneta to Iu Gainen ga Sonzai Shinai Taikutsu na Sekai (Shimoseka) light novel series has been featured as a poster in the Megami Magazine Special issue. This magazine issue can be purchased here.

In other news, the series recently taken out a full-page ad in Japan’s largest newspaper, the Yomiuri Shimbun, to promote the anime’s cast theme song singles and first Blu-ray / DVD volume release.