Back in September during the Tokyo Game Show 2015, DMM.com POWERCHORD STUDIO announced that they plan to bring the KanColle ship girls browser game to Android devices. The new version will share account information and data with the Flash client, so long loving KanColle enthusiasts won’t have to worry about losing their progress. After working out the details with DMM, the Combined Fleet Naval District official Twitter has now accounted that pre-registration will launch February 29th. 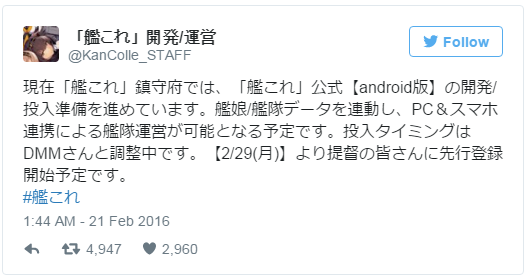 In related news, the first promotional video for the upcoming anime film based on the Kantai Collection franchise has been streamed.

the official website for the upcoming anime film based on the Kantai Collection franchise launched a new visual last December. The visual was previously spotted at Kokusai-Tenjijo Station railway station ahead of December 29-31’s Comiket 89.