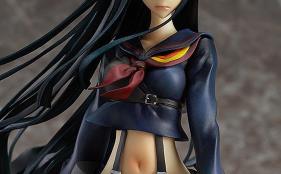 The recent Good Smile Company release of a 1/8 scale version of Kiryuuin Satsuki early last month has come with some controversy about the quality of the scale that some customers have been receiving. While the official pictures of the prototype that went up when preorders were announced appealed to many fans of Kill La Kill, the finished product has definitely had mixed responses, leaving some to wonder if the quality of the figure was trying to match the ever-fluid art quality of the show itself, despite GSC’s solid track record so far.

The main criticism of the final product seems to be the deviation of the face from prototype to finished product.

A simple comparison of the two pictures above highlight many differences between them. First and foremost are some of Satsuki’s most telling features, her eyebrows. In the prototype they were sharp and forming her signature angry expression, while in the final product they become more like pickled radishes and are much more blob like. Along with the eyebrows are the eyes themselves, with the final product’s looking much less angry and more flat than the prototype had shown, although many defenders of the final product say that with proper lighting the expression of the eyes is not as noticeable. However there is the final difference in the mouth of the figure that has turned off many from the figure. While the prototype features her characteristic grimace with all of the features and actual mouth has, like the vertical groove from the nasal septum to the lip and the upper lip having a characteristic “cupids bow” shape both of which the final product seems to have lost as well as a lot of definition of her lips. Again many consumers claim this problem only seems to exist under certain lighting conditions, but if a problem exists under even one lighting condition it can become a bother in how customers end up displaying the figure, possibly requiring extra setup.

All complaints and defenses aside, Kill la Kill isn’t exactly a show with an art style that translates perfectly into PVC. With Trigger’s “dynamic” art style featured in the show it can be daunting to try and create a figure that captures the details in a way that properly resembles the art style. Taking this into account, the final product was better than many fans of the show could have ever hoped for.

An interesting side note: All complaints about the figure seemed to die down once rotated 180 degrees and placed on a shelf above eye level.