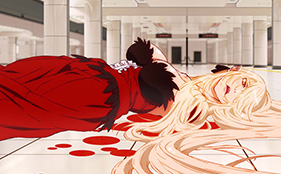 The first promotional video for the first film in the upcoming anime adaptation of Nisio Isin and Vofan’s Kizumonogatari entry in the Monogatari light novel series has been revealed. The promotional video teases with what’s to come in the prequel, set before Bakemonogatari and featuring the story arc Koyomi Vamp.