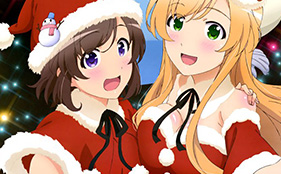 The official website for the anime adaptation of Koutarou Kosugi’s Futsuu no Joshikousei ga [LocoDol] Yattemita. manga began streaming a 30-second commercial for the upcoming second OVA project, which is a Christmas special. The anime special will air on Christmas Eve before it ships on home video.

The staff will also host an “all-nighter” event at Cinemart Shinjuku in Tokyo on December 24, which will show select episodes and the OVA. Miku Itou and Sachika Misawa will attend the event.

In related news, Nanako Usami and Yukari Kohinata have gotten festive in the latest poster of the series revealed in the January 2016 issue of NyanType. This issue of NyanType can be purchased here and you can view the posters that came in this issue here.

Locodol, short for Futsuu no Joshikousei ga [Locodol] Yatte Mita., is a Japanese four-panel comedy manga series written and illustrated by Kotaro Kosugi. It made its first appearance in Ichijinsha’s Manga 4-Koma Palette magazine with the October 2011 issue. An anime television series adaptation by Feel aired between July and September 2014.