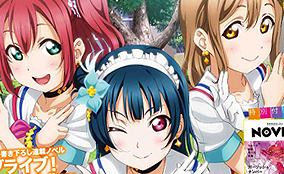 The “high-school idol” anime Love Live! has become quite the phenomenon since its very first anime incarnation debuted in January of 2013, due in no small part to its eclectic variety of catchy tunes, the memorable ensemble of μ’s, and even a highly successful mobile game that has been installed across over 1 million unique devices. That surge of popularity may have eventually marked the retirement of μ’s, but spawned a successor group known as Aqours whom are the central characters in the anime Love Live! Sunshine!! which debuted on July 2nd.

With only three episodes remaining in Sunshine!!‘s initial run, it begs the question of whether fans will get the chance to witness another 13 episode run akin to Love Live!‘s initial success. According to the series’ official Twitter account, Tokyo MX will be immediately re-running Sunshine!! every Tuesday beginning October 2nd which could signify the first step in continuing Aqours’ journey. Given the fact that the original Love Live! didn’t return with its second season until April 2014 — more than a year after the first season’s air date — it’s safe to say if a second season does manifest, it won’t be for some time.

To keep feeding fans their daily dose of high-school idol goodness, quite literally, the official Love Live! Twitter announced a collaboration to bring Kunikida Hanamaru’s favorite bread treat to real life. According to the following tweet, more details will announced in due time when you can get your hands on this delightful, giraffe-adorned treat.

Additionally, the music track that will accompany Love Live! Sunshine!!‘s finale, “Mijuku Dreamer,” will be on sale starting September 14th, alongside “Yozora o Terashitai.” Lantis’ YouTube channel has uploaded a 60-second excerpt of the single, as well as a preview of the album’s cover.

Aqours will also be exploding onto the cover of Dengeki G’s October issue!