Let’s be honest here, 2012 was a brilliant year for anime. Tons of quality shows released this year that set the benchmark for years to come. It’s pretty hard coming up with a top ten list when there are just so many awesome shows to discuss, but I managed to sort the ones I likes the most. Well, here’s the year-in-review for 2012. Let’s start with number 10… 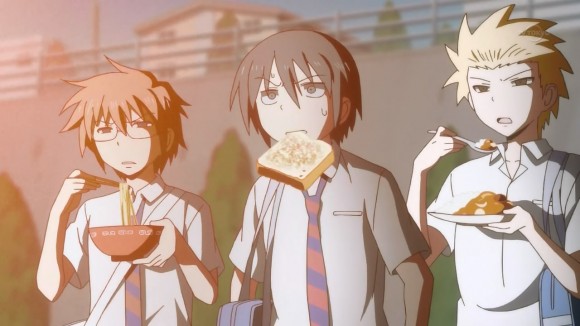 Daily Lives of Highschool Boys (Danshi Koukousei no Nichijou) follows the lives of three best friends in their sophomore year of highschool, tracking their foolish little adventures and the predicaments of being a highschool student in an all-boys school. There is no plot, as it is a pure comedy/slice of life anime, but that doesn’t mean it isn’t involving, in fact, quite the opposite. This is easily one of the funniest shows of the year, and pretty much anyone can relate to the situations they are in. Animation is good, voice acting is enthusiastic, and the humor is pure gold. Divided into little skits per episode, this is a great show to just kick back and relax to for a quick laugh. I felt it definitely deserved a spot on my list, because of all the laughs it gave me, coupled with the fact that I could really relate to the characters. 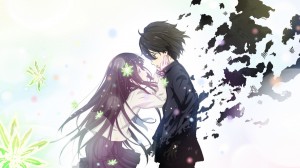 Hyouka is the story of Oreki, a highschool student who is the kind of person to try and get away with doing as little as possible. A very detached sort of fellow. However, at the request of his older sister joins the Literature Club at his school. There he meets Chitanda Eru. A quiet, decent girl with irresistible violet eyes. The two, along with two other friends chance upon a mystery from generations ago that they then try to reveal. Though a work of Kyoto Animation, the show is a lot more mellow and drab compared to any of their other works. A lot more down to Earth, one could say. Generally a mystery/slice of life type show, though it is slow, the story is great, and well told. I enjoyed the plot enough that it deserved to be on the top ten list. Th change of pace is certainly nice, but it isn’t for everyone. Not a very thrilling show, save for a few episodes. 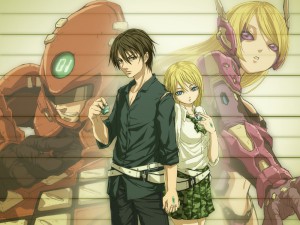 Btooom! is about online gaming champion Ryouta, who is a loser in real life, but in the world of popular video game; Btooom! – in which players use bombs to kill each other – he is one of the worlds most elite players. However, things get interesting for Ryouta when he suddenly wakes up on an island without his memory, only to discover that he is in a living, breathing version of his favorite game! He must battle to survive this twisted death game and discover what is happening. The story sounds very similar to the old Japanese film Battle Royale, but with a modern twist. Very interesting idea for a show to be made from this, and definitely an enjoyable, action-packed watch. 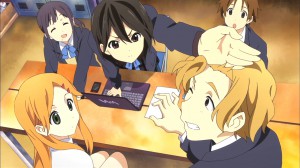 Kokoro Connect is the story of five highschool students; the helpful Taichi, the happy-go-lucky Iori, the carefree Aoki, the shy Yui, and the strict Inaba. Each outcasts in their own right band together to form their own little club of misfits. However, relationships become strained as strange, supernatural occurrences begin taking place among the five. The show is definitely a very emotional one, combining funny scenes with heart-wrenching ones to produce a very emotionally gripping ride. You truly feel a connection with the characters by the end. The soundtrack and animation are both brilliant, and the story is one of the best ones this year. Though some things are left unexplained, a second season is rumored. 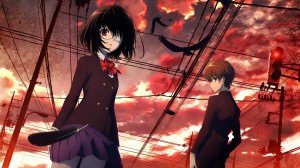 Animated by ViZ media, Another revolves around a highschool in which a popular girl died, many years ago. Sakakibara, a transfer student from Tokyo arrives at this school and sees an enigmatic, eyepatch wearing girl named Misaki often looming about and gains curiosity. What follows is a suspenseful, thrilling show, the likes of which hasn’t been done right since Serial Experiment Lain and Ergo Proxy. The visuals are beautiful, if not slightly creepy, but it makes for a very enjoyable watch. An eerie suspense show that is one of  kind, this year. 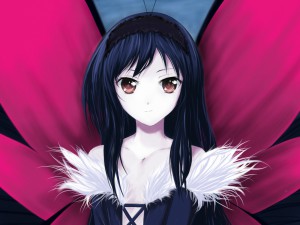 Taking place in the near future where a parallel virtual world exists, Accel World is about young boy Haru. In his school, Haru is among the least popular, and always bullied because of how short and fat he is. He often turns to the virtual world to escape his miserable life. But his life becomes a lot more exciting when the most popular girl in school befriends him and introduces him to the Accelerated World. This show not only has beautiful animation and depicts a world anyone would want to be a part of, but tells a good story with dynamic characters. Action sequences are stunning, and it remains interesting enough to watch through to the end. Definitely had to be among the best of the year. 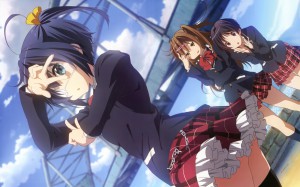 Chuunibyou demo koi ga Shitai is a show about a boy named Yuuta who suffered from “8th-Grade-Syndrome”. He used to live in an imaginary world where would pretend to be the “Dark Flame Master” and go on little adventures in his mind, wearing costumes and playing with toys. Once he got to highschool, he decided to leave all that behind and live a normal life. However, that is when he meets Rikka. An eyepatch wearing girl who too lives in this imaginary world, and believes she possesses the power of the “Wicked Eye”. The show is a comedy for the most part, but as it progresses, reveals a much deeper, and emotional story that delves into Rikka’s past. Animated by Kyoto Animation, so we know it has to be good. Certainly a piece of gold. 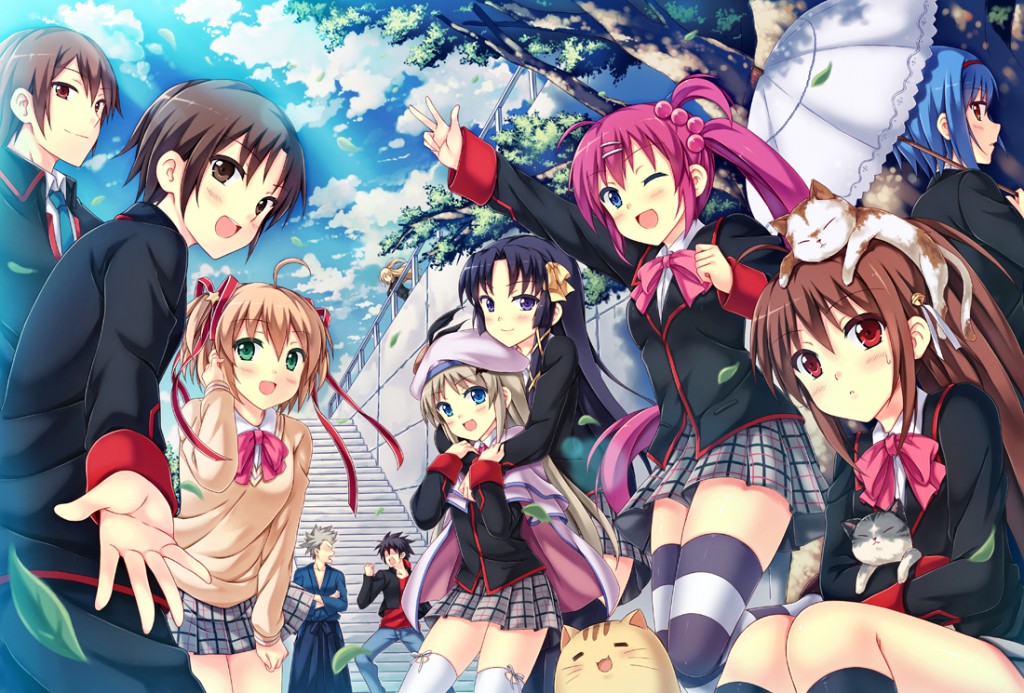 Little Busters! are what a group of children called themselves, their goal being to fight for justice and vanquish evil. Now several years later, this group of friends still hang out with each other, sharing adventures and being there for each other, both during good times and bad. A mixture of moe, comedy, and some drama. This Key Production is the closest thing of one of my all time favorites, Clannad. Definitely worth watching for fans of other Key shows. Beautiful animation, well developed multitude of various characters, excellent story arcs, and overall a very pleasant, memorable show, with both funny and tear-jerking segments. Coming from a long line of shows by my favorite production company, this had to go in the top three. 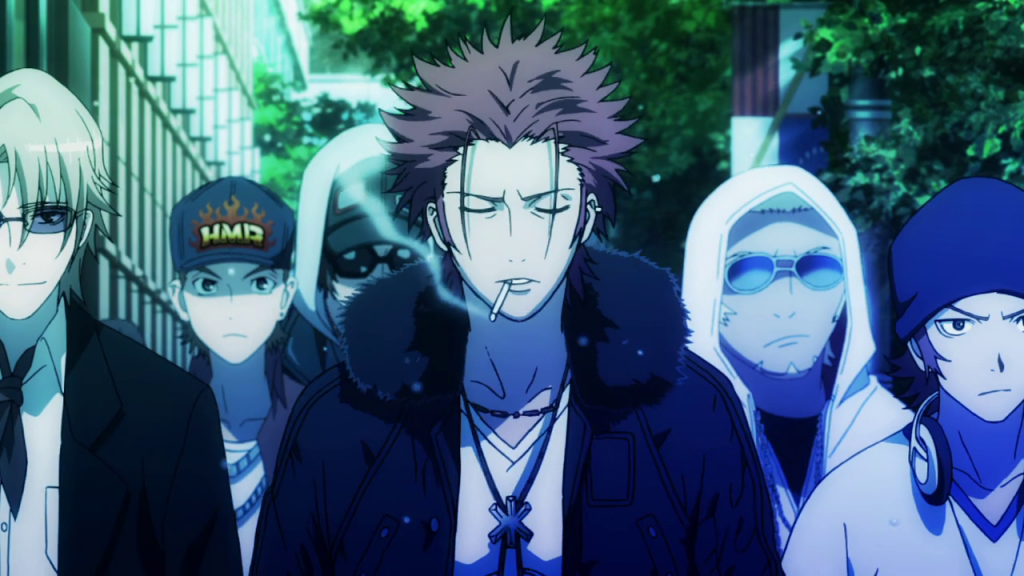 K takes place in the near future, revolves around the lazy, lying, carefree Yashiro, a highschool student in this unique world. Caught in a war between 7 kings with supernatural powers, the show is easily one of my top favorites of the year. The animation – by Viz Media –  is absolutely breathtaking, with its vibrant colors and filters. The direction is stylized and classy, making the show a really memorable for generations to come. This show is certain to be in the same league as classics such as Cowboy Bebop. The setting is original, and aesthetically appealing, the characters, though many, are unique and well developed, the action segments are as brutal as they are wonderful, and the story is entertaining in its own right. A must watch for action fans. One of the best shonen shows of all time, in my opinion. 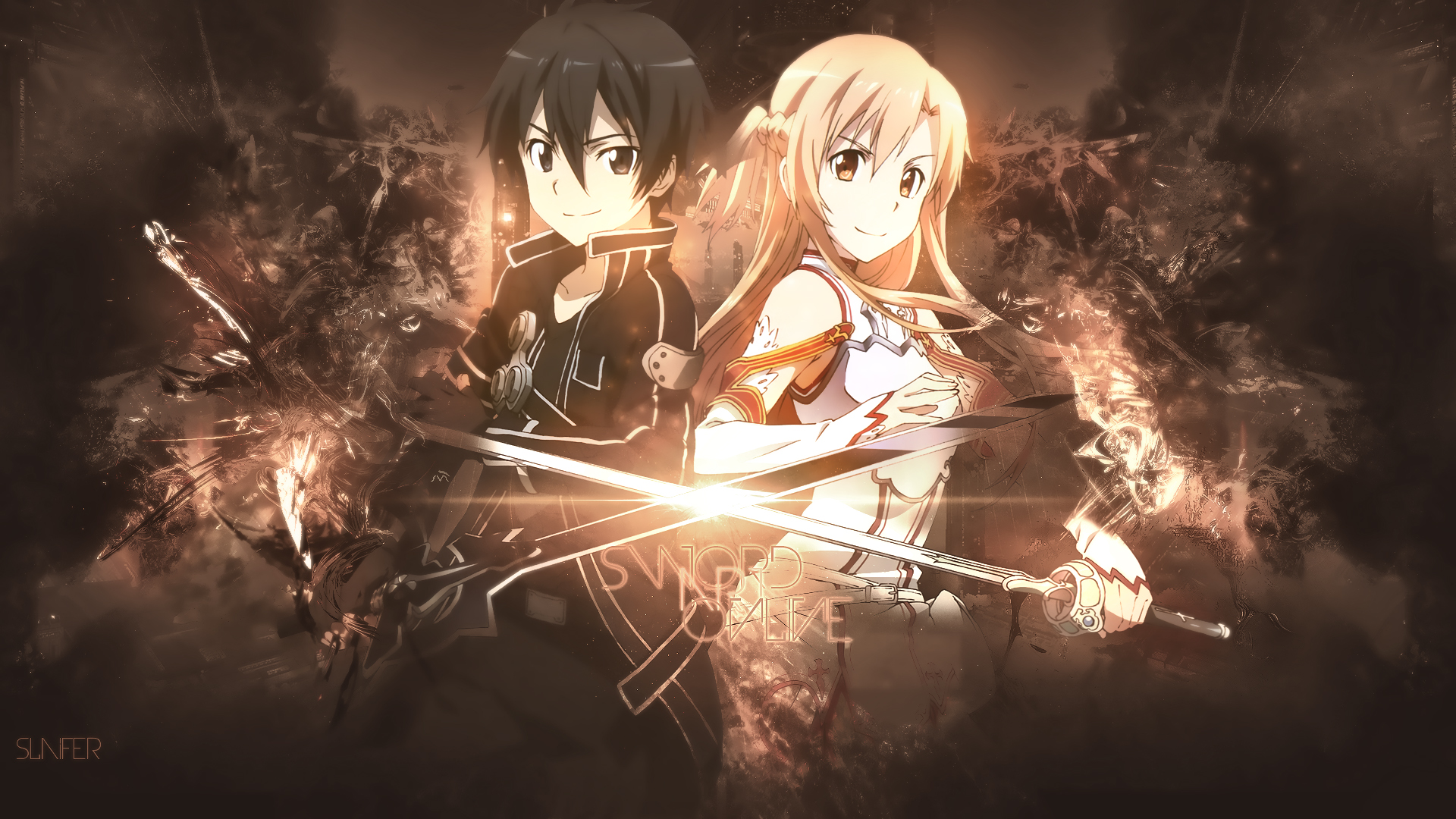 Sword Art Online is the name of a groundbreaking virtual reality massively multiplayer role playing game, in which players wear a helmet to be transported into the virtual world, where they fight monsters and level up various skills. However, things go awry when the creator disables the log out function leaving players stuck in the game, the only way to leave is to win – and if you die in the game, you die in real life. The story follows former Beta-player Kirito as he quests to escape this world, and the characters he meets along the way, including a girl named Asuna. This show is easily the most popular show of the year at least, if not all time. Smashing several records, being more popular than even long running shows such as Bleach and Naruto, as well as the protagonist Kirito winning the position as best main character in several anime magazines, SAO has amassed immense popularity. Animation is top notch, as well as characters and plot. In my opinion, and surely in the opinion of thousands of others, this is the best anime of 2012.

Well, I hope you liked my list. Bear in mind however, that this list is comprised of my own personal opinion of this years shows. What is your list? Do you agree with mine? Disagree? Let us know in the comment section and discuss this years shows!