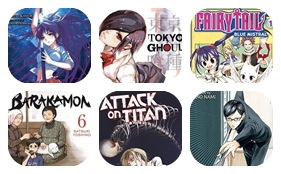 Every Tuesday, most of North American manga publishers release new titles and volumes to bookstores and online shopping sites. Here at Haruhichan, we will be giving you a comprehensive list of manga and light novel volumes (in print) to be released for the month of August, with their publishers. These titles are arranged respectively by date and their title.

*We’ve made an exception on Citrus as it belongs to a major publishing company with a large audience.