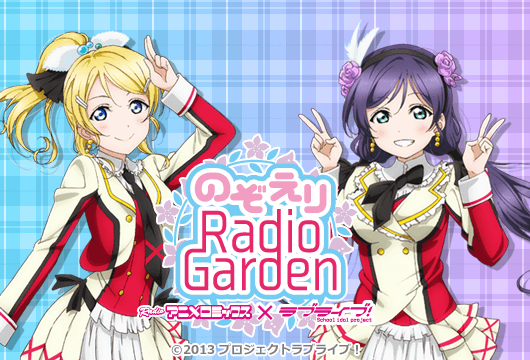 The NozoEri Radio Garden first aired January 4th, 2014 as a radio talk show with both Nanjou Yoshino (Ayase Eli) and Kusuda Aina (Toujou Nozomi) as the hosts. The show itself was sponsored by Animelo Mix in collaboration with the Love Live school idol project! Some of the topics discussed on the show are things such as winter break, and what they both do over the break. Other things can range from fan mail to facts you didn’t know about muse. The show had a total of three guests in its lifetime. These guests included:

You can find each program on Nico Nico’s video service here.

You can also find a translation and summary of each program here.