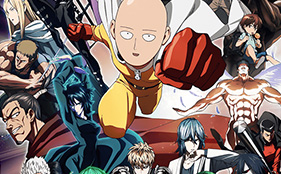 The official website for the upcoming anime adaptation of ONE and Yuusuke Murata’s One Punch-Man manga began streaming the third promotional video on Sunday. It was also revealed that the opening theme titled “THE HERO !! ~Okoreru Kobushi ni Hi wo Tsukero~” will be performed by JAM Project while the ending theme song will be perfomed by Hiroko Moriguchi and titled “Hoshi yori Saki ni Mitsukete Ageru.”