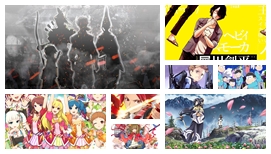 Here we go again, having a line-up ready to close the year. It’s already the Fall 2015 season! As usual we at Haruhichan have a hashtag list for your usage in case you go ranting, rambing (and fangirl/boying) on Twitter or Tumblr. Here are the list of Fall 2015 anime that will be airing and their hashtags, official Twitter account and websites. These resources will be helpful for sharing and attaining information about these shows. Also, if you would not want to get spoiled from a certain show, muting a hashtag is a piece of cake. (To know how to mute a hashtag, click here.)

Here is a list of the official anime hashtags, official Twitter accounts and websites that I have compiled from long-running shows, Summer leftovers and this Fall 2015 season, including some specials!:

Several shows don’t have a hashtag, it is preferable to create your own hashtag pertaining to the anime that you are going to talk about. It is much better if you simply use the title of the show without adding symbols (E.g.: For Naruto Shippuuden, you can just use #narutoshippuuden). Or in general, use #Fall2015Anime for this season.

There are SO many shows! About 120 of them this season, and more than 50 new series. Hokuto no Ken: Ichigo Aji seems like our contender for the longest website URL versus K season two’s quite funny website URL! And Subete ga F ni Naru: The Perfect Insider has a nice website opening! We also got a few anime Twitter accounts that are already verified. Which of these hundred shows are you planning to watch?