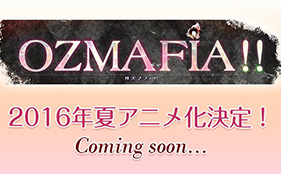 The official Twitter for the game brand Poni-Pachet revealed that an anime adaptation of its game Ozmafia!! has been green-lit for this summer on Thursday. The Machi Asobi Vol. 15 event revealed last fall that it will be composed of anime shorts and based on an original story from the game.

The cast has not been revealed yet but the game cast consisted of:

Manga Gamer also streamed the opening movie for the game back in July, 2014:

A manga adaptation by Yurino Tsukigase was released in 2012, prior to the game’s release. It was originally published in Otome High! and later released via Web Comic Action. Futabasha published three compiled volumes of the manga.

Here’s a synopsis of the series:

Ozmafia!! follows the tale of Fuka, a girl with amnesia who doesn’t remember her own name, once she’s rescued from the streets by members of the Oz family mafia. She begins trying to do her best in this dangerous city where several different rival mafia gangs are constantly at war for control and territory.

As Fūka tries to make do for herself amidst this danger, what fate lies in store for her? Will she grow close to one of the members of another faction? Will she fall in love with a member of the Oz family and face a love-triangle over her affections? The choice is yours!