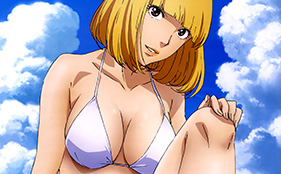 One of the more anticipated shows of the season is Prison School. With its broad array of characters, (including several gorgeous girls), the animation looks incredible, as well as just the right amount of ecchi. “Ai no Prison” by Kangoku Danshi (group formed by the cast (Hiroshi Kamiya, Katsuyuki Konishi, Kenichi Suzumura, Daisuke Namikawa, Kazuyuki Okitsu)) is the track that plays and it sounds great, perfectly fitting the absolutely sick animation style. Watch the full OP below.

The Prison School anime’s first episode aired on Tokyo MX on July 11th at 1:05am JST. The anime then aired on the 12th at 12:30am JST on KBS Kyoto followed by an airing on TV Aichi at 2:20 am JST. It will then air on BS11 at midnight on the 13th, on Sun TV an hour later at 1:00am JST, and finally at 3:30am JST on AT-X. The anime will also be streaming online on various platforms, including Niconico, J:COM, Bandai, Amazon and PlayStation Video.

It was also revealed earlier that the series will have a total of 12 episodes.

n addition to this, the website revealed the first details about the Blu-ray and DVD releases of the anime. There will be a total of 6 volumes being released with each volume containing 2 episodes each. The first volume, releasing on September 30 will contain episodes 1 and 2, a special event ticket, new illustrations on a 3-sided case (designed by Junichiro Taniguchi), Gokuchuuki booklet (8 pages), Textless OP/ED, audio commentary for episode 1 and special set of cards. The remaining volumes will release on the last Wednesday of the month:

Latest PV of the anime: