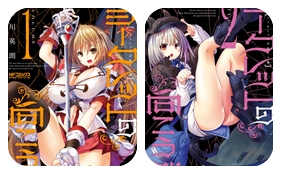 According to the official website of North American publisher, Seven Seas Entertainment, they have acquired the license to publish Hideaki Yoshikawa’s (Kaminomi, Kagaku na Yatsura) Secret no Mukougawa (The Other Side of Secret) manga as individual volumes. The first volume of the manga is slated for June 7, 2016 for $12.99 USD or $14.99 CAD with a colored insert.

The ecchi, demon-action, seinen manga was published under Media Factory’s Comic Alive magazine since September 27, 2014. The manga has accumulated two compiled manga volumes in Japan. The first volume was published on November 22, 2014 while the second volume was shipped on March 23, 2015. The upcoming third volume will be released on July 23, 2015.

Synopsis of Secret no Mukougawa from Seven Seas:

Yuto has been plagued by the disappearance of his sister after he witnessed her vanish through a strange portal. Seven years later, he sees two girls emerge from the same magical doorway. Not about to let this chance to find his sister pass him by, Yuto follows them back through it and is transported to a strange and dangerous world.

There Yuto finds his sister but at a price. A terrible mistake costs the lives of many of that world’s inhabitants, and Yuto is to blame. Can Yuto atone for what he’s done and bring his sister back home with him?