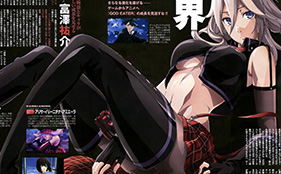 A new visual of Alisa Illinichina Amiella from ufotable’s anime adaptation of Bandai Namco’s God Eater series has been revealed in the September issue of Animage as a double page spread. This issue of Animage can be purchased here. The first main members of the anime’s cast include: