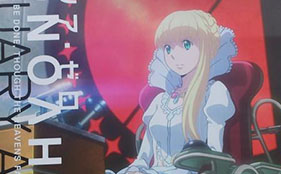 Back in October the official website of the Aldnoah.Zero series released the first visual for the upcoming second season of the anime, which will air from January 2015. Today a new visual has begun advertising across Japan for the return of Aldnoah.Zero.

Aldnoah.Zero will return January during the Winter 2014/2015 anime season. Further information about the second cour of the anime will be revealed soon.