A new Comiket 88 promotional video has been streamed by Warner Entertainment Japan for the upcoming limited edition Shirobako CD, with solo covers of the various openings and endings of Shirobako by the various voice actresses of the series on Tuesday. Each of the five main charactrers have at least one song, with Juri Kimura (Aoi), Haruka Yoshimura (Emma), and Haruka Chisuga (Shizuka) claiming a second song each, for a total of 8 songs. The CD will sell for 4,000 ($32) yen.

The promo video advertises the upcoming limited edition CD release and the Comiket 88 event which is due to take place on August 14, 15 and 16, 2015. 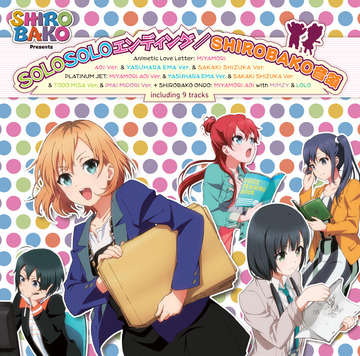 In addition to this, the official products that will be sold at the KADOKAWA booth during the Comiket 88 event have been previewed.

Other products being sold include:

In addition to this, it was revealed in the 6th issue of Anime Style, P.A Works founder, president, and Shirobako‘s producer Horikawa Kenji was interviewed. During the interview he revealed that there is enough material to work with for a sequel but director Tsutomu Mizushima is currently busy for the next few years with other series. He also mentioned that even producing an OVA would be tough.