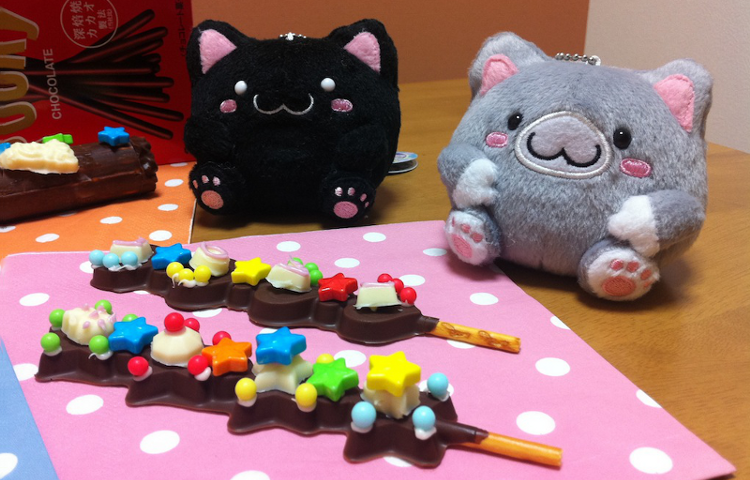 Cause Pocky reviews haven’t been done a million times already

So there is like a lot of different flavors available.
I took the liberty of testing out 5 different standard flavors for the beginners out there.
It was a difficult task but I persevered for the sake of this review.

Anyway.
Here’s my take on each flavor. (Keep in mind everyone’s tastes are different, obviously) 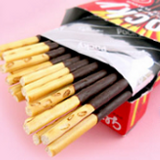 Chocolate –
This is the original flavor.
It tasted kinda like dark chocolate to me. At first it was a bit strong, but then you got used to it. Went down really good with a glass of milk though.
Not bad, but not the best flavor by a long shot.
Verdict 6/10 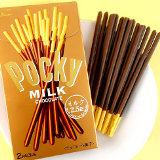 Milk Chocolate –
Taste like every other milk chocolate, although it is much nicer
than the original flavor above. I prefer this over one over that as this one is quite moreish. I would have to say that out of the 5 flavors I tried.
This would be my second favorite.
Verdict 9/10 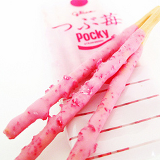 Strawberry –
In order to truly appreciate this particular flavor. You must first inhale the amazing aroma of the strawberry cream as you open the packet. There are also tiny bits of strawberry infused into the cream coating. The only problem I have with this one though is that it can get a bit sickly after a few boxes.
Verdict 8/10 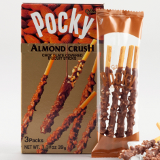 Almond Crush –
Definitely my favorite flavor of the bunch.
It has a rich milk chocolate taste with small almond pieces infused into the chocolate cream coating.
As with the strawberry flavor above, it has an amazing aroma as you open the packet.
Verdict 10/10 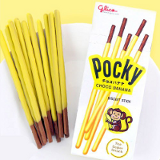 Banana –
This flavor was an instant like for me.
It has a distinct rich banana flavor with a hint of creamy milk chocolate. Not too sweet and very enjoyable. I just grabbed an entire packet in one hand and ate them all at once.
Verdict 9/10

Pocky is a Japanese snack food produced by the Ezaki Glico Company of Japan. It was first sold in 1965, under the name Chocoteck, and consists of a biscuit stick coated with chocolate. Pocky was an instant hit among Japanese teenagers, and brought in sales of 30 billion yen in its first two years. The name was changed to “Pocky”, after the Japanese onomatopoetic word for the sound Pocky makes when bitten, pokkin. The original was followed by “Almond Pocky” in 1971, with an almond coating, and “Strawberry Pocky” in 1977. Today, the product line includes such variations as milk, mousse, green tea and coconut flavored coatings, and themed products such as “Decorer Pocky”, with colorful decorative stripes in the coating, and a dark chocolate version.

Pocky is very popular in Japan. In bars, it is sometimes served in a glass of ice water. It also has a significant presence in other East Asian countries such as China and Korea. In Europe, Pocky is renamed Mikado after the game Mikado. In the United States and Canada, Pocky can be found in Asian supermarkets and the international section of most large supermarkets, as well as Wal-Mart Supercenters and anime convention dealers’ rooms. In Malaysia, Pocky was renamed by the Glico Company as Rocky, perhaps to avoid a vulgar word in Malay with similar pronunciation. Pocky has recently been marketed in America by LU, a company of the Danone Group. 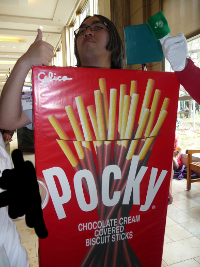 Outside of Japan, Pocky is fairly popular among Japanophiles and otaku (anime fans). Its constant association with the Engrish phenomenon and the oddness of some of its versions (like the “Men’s Pocky” bittersweet flavor), as well as the several Pocky parodies seen on many anime/manga series, contribute to the snack’s reputation.

For the amount of cash money I blew on these bad boys I could’ve just brought like 10 packets of Tim Tams instead, which are basically the exact same thing. Plus you get more biscuits per packet, they are bigger and have substantially more chocolate/creme on them.
That said, Pocky is a novelty you have to experience at least once if you haven’t already so you can say been there, done that. Then whether you like it or not, is up to you.

The Demon Girl next Door in Akihabara