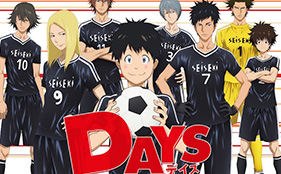 The official website for the upcoming TV anime adaptation of Tsuyoshi Yasuda’s Days soccer manga has revealed the supporting cast members for the series. The supporting cast and their character designs is as follows:

In addition to this, Pony Canyon began streaming the first teaser which previews the animation of the series.