Notice how there are always different school uniforms in anime? That’s very true for Japan too! Not only does each school have its own take on the school girl uniform, but the different regions in Japan have a different sense of how a uniform should look.

Twitter user tmato30kcal shared his take in the form of art on this topic, by pointing out the few differences of how uniforms generally look in the many different areas of Japan, from all the way north in Hokkaido to as far south as rural Okinawa. 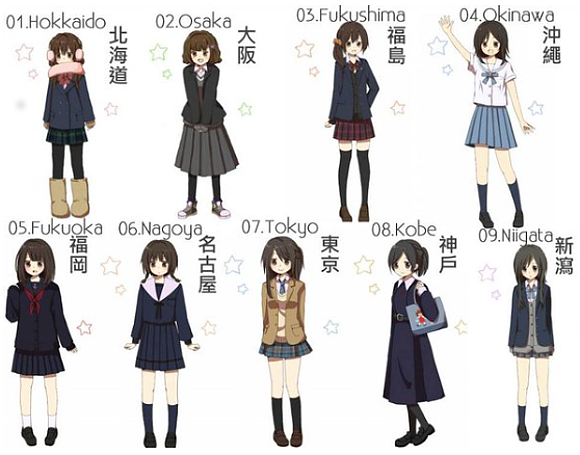 tmato30kcal depicted the girls in their winter uniforms, since it’s still around the cold season. They noted that certain trends and the weather in the areas usually affect how most school girl uniforms look like and it also affected the type of skirts, jackets, coats, neckties, accessories, and even the socks they wear. For example, in Hokkaido, which is in the north and drastically colder, uniforms tend to be made from heavier material as opposed to the Okinawa style, which suits the warmer climate. A few twitter users also shared their thoughts:

“This is totally true for Kobe!”

“Nagoya girls now wear their skirts much shorter than this”

“I’ve never seen a schoolgirl in thigh-highs before”

“Thank you for sharing your valuable experience with us!”

What do you think about the differences in styles? Which one is your favorite?