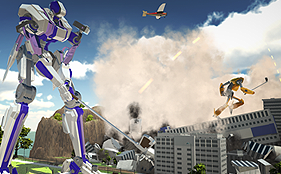 The PlayStation Experience convention – hosted by Sony Computer Entertainment at the Moscone Center’s west hall in San Francisco – started with more than just a bang, but a sonic boom. The PlayStation keynote, which kicked off PSX’s festivities, bust the door down with their guns blazing as Square Enix revealed gameplay for their remake of the coveted, smash-hit JRPG Final Fantasy VII.

As if that wasn’t enough to scratch that JRPG itch you’ve got, it was later revealed that the Ni no Kuni series – developed by Level-5 (Yo-kai Watch, Dark Cloud) in collaboration with animation powerhouse Studio Ghibli – would receive another entry dubbed Ni no Kuni II: Revenant Kingdom.

The keynote took some much needed time, however, to discuss and elaborate on Sony’s upcoming PlayStation VR peripheral which is expected to release within the first half of 2016. Amongst a tech demo and a handful of titles expected to release with Sony’s virtual reality platform in mind, there was certainly one title that stood out from the rest. A game so abstract, ridiculous, and self-aware, it glistens above the rest with how nonsensical it is. Though, it’s that presentation that puts its foot in the door and empowers that urge to get your hands on it simply to witness it for yourself.

That’s where developer No Goblin comes in with 100ft Robot Golf, chock-full of nostalgic charm as if trying to summon the great Hideaki Anno himself.

Giant mechs won’t be fighting to save the galaxy from alien bogeys, but instead fight to save themselves from a double bogey. Players will be thrown into the cockpit to duke it out with up to three other players, both local and online, amidst a playground of destructible environments and the freedom to go wherever you want. The path to the green can be whatever you want it to be, whether it’s on top of a destroyed building or even on an aircraft carrier.

Want to screw up your opponents and stand in the way? You can do that. Want to run up to your opponent and smack them with your nine iron? You can most definitely do that. Do you ever just stop and think to yourself: “what would it be like to pilot a giant mech, set up a tee on the moon, and send a giant golf ball soaring down to Earth?” No Goblin thought of that, too, and guess what? You can do that.

Whether you’re online or playing on your couch with your family and friends, you can experience 100ft Robot Golf and all of its real-time mayhem. A more traditional, turn-based mode will also be available, along with custom rulesets to tweak the rounds to your preference. Furthermore, each pilot and robot you can choose from will have a variety of varying skills and playstyles. According to No Goblin’s official site for 100ft Robot Golf, you have the freedom to be a pilot which is actually “five small dogs in a suit.”

For those who wish to deviate from the default set of robots, players can customize their very own special mech which can be implemented in online play. 100ft Robot Golf isn’t all just multiplayer, however, with a “90’s-inspired mecha animation” solo campaign confirmed for release. While 100ft Robot Golf will feature PlayStation VR support, immersing us in the life-long dream to become mech pilots, the game can be played without the peripheral.

The idea behind 100ft Robot Golf is fantastic, combining the haphazard havoc of mecha anime with – ironically – a quiet round of golf. Surprisingly, the studio has published a video on YouTube showing precisely when that very idea popped up during a rousing game of Neo Turf Masters for the Neo Geo.

100ft Robot Golf is expected to release in 2016 for PlayStation 4 and will have PlayStation VR compatibility. For more information and to keep up with development, you can visit the official 100ft Robot Golf website and by following @No_Goblin and @100ftrobotgolf on Twitter!