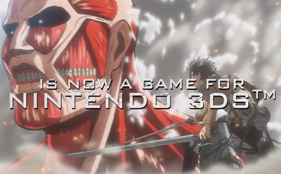 It was announced at the recent Nintendo Direct that a release of Attack on Titan: Humanity in Chains, the most recent Attack on Titan game for the 3DS, is coming out this May. The first teaser trailer was also released and gives us a brief look into the new gameplay and graphics of the game. The game is developed by Spike Chunsoft who published the game in Japan as Shingeki no Kyojin ~Jinrui Saigo no Tsubasa CHAIN, and were looking for a publisher for western audiences. Atlus USA will be publishing the game internationally.

Attack on Titan: Humanity in Chains will be releasing in European and North American regions this May on the 3DS.