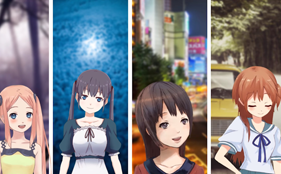 The FaceRig team, in partnership with the team behind the Live2D module, just recently uploaded a DLC of their FaceRig software on the Steam Store, allowing artists to make their own 2D models and animate them just like if they were 3D!

FaceRig is a program enabling anyone with a webcam to digitally embody awesome characters. It is meant to be an open creation platform so everybody can make their own characters, backgrounds or props and import them into FaceRig.

Live2D is a technology built by a Japanese company meant for artist to animate their 2D characters in 3D while keeping all the amazing aspects of a 2D character. Live2D offers a free tool (only for individuals) for anyone to bring their artwork to life!

Some wonderful characters are already uploaded by independent artists through the Facerig’s Steam Workshop, with some examples below.