Publisher Prototype have announced that Key’s acclaimed Visual Novel Clannad will be releasing on the PlayStation Vita this Summer. The game’s release on Sony’s newest handheld console is to mark the 10th anniversary of the series. 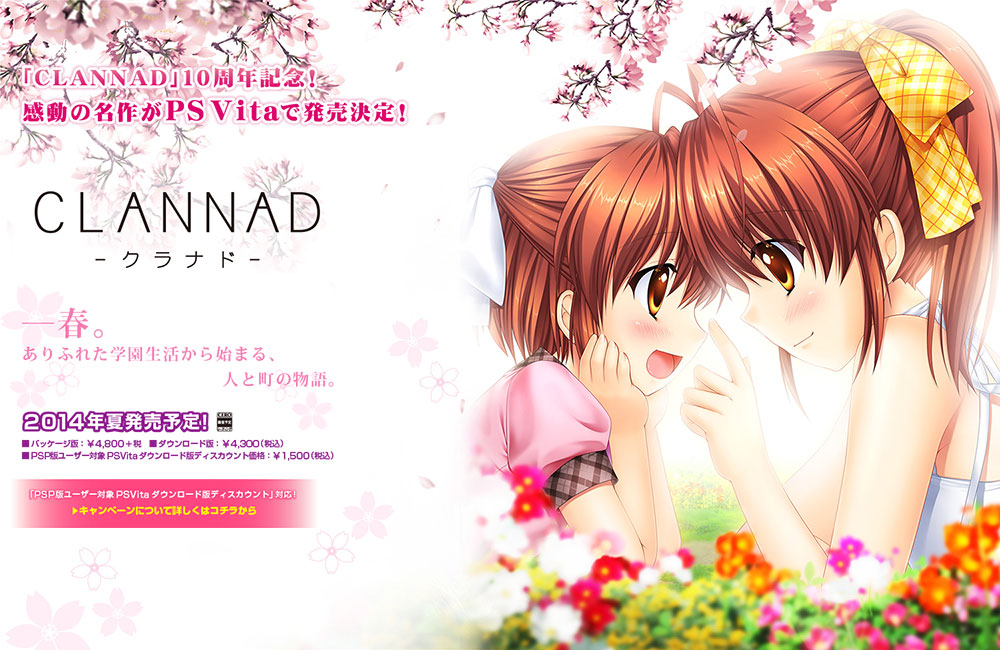 Clannad for the Vita will be launching in Japan sometime this Summer. The game will cost ¥4,800 (~$48 USD) retail and the digital version from the PlayStation Network Store will cost ¥4,300 (~$43 USD). Prototype are also offering a discount campaign for players who purchased Clannad for the PlayStation Portable, who will get the Vita version for ¥1,500 (~$15 USD). Additionally, the discount campaign will also be applied to other games published by Prototype. Players who have Little Busters! Converted Edition, Art of war of the Three Kingdoms love Senki Otome! ~ or Rewrite for the PSP, can get a discount from the PSN/SEN Store for a digital version of the game for the Vita.

The game will take advantage of the system, having full touchscreen controls, updated graphics to fit in the Vita’s 960×554 screen and will support Vita TV, an external device that can output the Vita to a TV. Prototype have released some screenshots of the game:

Clannad is a Visual Novel developed by Key. It is the third developed game that released in April 2004 for Windows. The game received high sales and critical acclaim in Japan, with the regular edition selling over 100,000 copies in 2004. The game has then received a light novel, and three manga adaptations. The game also received an animated film from Toei Animation, who also produced the animated films for Key’s other VNs (Kanon, Air). A TV anime was produced by Kyoto Animation that aired in 2007, and was followed up by a second season in 2008 titled Clannad ~After Story~.

Clannad will be out in Japan on the PlayStation Vita this Summer. For more information visit the game’s official site: http://www.prot.co.jp/psv/clannad/index.html