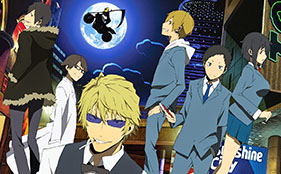 With Durarara!!x2 Shou airing last Saturday and everyone settling back into Ikebukuro, fans are currently experiencing mixed feelings about the new opening and ending theme used.

While the new opening theme can’t top the first opening theme of the series, Uragiri no Yuuyake by Theatre Brook, it sure is different in a good way. OKAMOTO’S performs the opening theme song titled HEADHUNT:

The ending theme song titled NEVER SAY NEVER is performed by THREE LIGHTS DOWN KINGS. It doesn’t beat the first ending theme Trust me by Yuya Matsushita from the first season, but at least the animation sequence is identical.

What are your thoughts on the new opening and ending theme songs used for the second season? Personally I like the new and fresh approach. I prefer the opening theme over the ending theme, mainly because I feel that the ending theme is too fast paced for my liking.