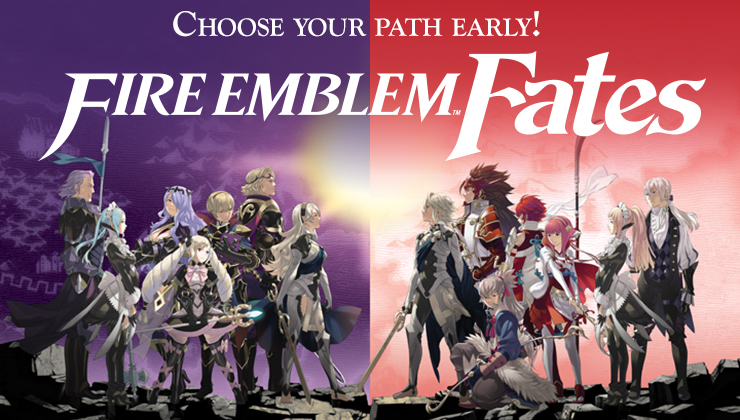 In 1990, the original Fire Emblem was released in Japan. Controlling individual soldiers on the battlefield was something new to the world of gaming. The original Fire Emblem created the tactical role-playing genre and this genre has seen numerous offspring like Final Fantasy Tactics, Disgaea, and XCOM. Despite being the progenitor of the genre, the Fire Emblem series stumbled into the start of the new millennium and profits were falling. Seeing the end in sight for the series, Intelligent Systems prepared for the last hurrah with Fire Emblem: Awakening back in 2012. The game was a smashing success and easily broke Nintendo’s worldwide unit sales goal of 250,000. It sold over 230,000 copies in Japan alone in the first week, and by the end of 2014, worldwide sales totaled just under 2 million. With these encouraging numbers, Nintendo greenlit another game in the series soon after Awakening was released. This game would end up being split in three by the end of development, and ファイアーエムブレムif would release in Japan in June 2015 to the delight of fans, and sold just as well as Awakening did. In the West, it has been renamed Fire Emblem Fates.

There are spoilers ahead, but most of it has been revealed in the trailers.

The overview of the game is this: Two kingdoms, Nohr and Hoshido, are in a tense peace. Hoshido enjoys the peaceful times, while Nohr is constantly looking for ways to show off its glory. Despite the peace, the two sides skirmish often, but all-out war has been avoided so far. You play as Corrin (you can change the name), a Nohrian prince/princess who is coming of age. Corrin has enjoyed a relatively peaceful childhood, surrounded by the Nohrian royal family and their various retainers. In order to prove his/her loyalty to Nohr, Corrin must kill a Hoshido soldier one way or another. While on a misson to fulfill this condition, Corrin is captured by Hoshido, where he/she learns he was actually born a Hoshidan prince/princess. After meeting his/her blood family, and Hoshido’s retainers, Corrin tries to come to terms with what he/she has just been presented. Nohrian assassins break into the Hoshidan capital and Corrin’s blood mother, the queen of Hoshido, is killed. The two sides declare open war on each other, and during the first battle, Corrin finds himself/herself surrounded by both royal families. There he/shemust make the choice between siding with the family that raised him/her, or the family that he/she was born into.

Nintendo of Canada rented out a building in Toronto for this event, and posted the event on their website. For the first time, Nintendo had you reserve your place in the event instead of making it public as they usually do. The first 100 people got a free t-shirt, and the t-shirt was based off whether or not you wanted to play Conquest or Birthright. Having a private venue for the event was certainly a plus, as Nintendo could set up as they wanted instead of being restricted like their events at Best Buy. It was a really nice set-up too, as they split the room between Conquest and Birthright.

I am personally a bigger fan of Birthright, if only because I’m a sucker for true family, so I played the demo for Birthright. The gameplay for both will be similar of course, but the story will change depending on which version you pick up. Birthright will follow Awakening’s formula of being able to openly traverse the map and take on random battles. Conquest will play like classic Fire Emblem games where grinding is not an option. This may help you make your choice of which game you would like to play if you only have one choice. The only true way to get the whole story however, is to play all three games.

The demo I played had me on Chapter 13, which is a fair way into the game. The mission was a simple ‘defeat all the enemies on the map’ objective, with the enemy boss being Camilla. Since I was under a time limit with no tutorial, I had no way of learning about the units I had. There are new classes to this game that were not in previous games like the Ninja class for Hoshido, as well as new weapons. Being a little rushed and not knowing the limits of my units, I lost a couple of characters to silly mistakes, or misjudging their strength. I also wasn’t given enough time to complete the mission and I had to move on for other people to play. According to my friends who played Conquest, they played Chapter 10, where the objective is to defend multiple areas for 11 turns.

In terms of general gameplay, there aren’t any real changes. The biggest fundamental change is durability of weapons has been taken out. Weapon durability/uses has been a mainstay of the series for as long as I can remember. Not having that in the game is really odd. I’m not sure how other people will react to that change, or how the developers balanced not having durability. In addition, on the map I played, there are spots on the map called Dragon Veins that have an effect on the battlefield. These can only be activated by members of the royal family, however, the enemy royal family can activate these as well. Keeping the effects of Dragon Veins in mind will also determine how you position your units on the battlefield. Corrin also has other abilities that can alter the battlefield including summoning bridges, but these particular ones weren’t in the demo.

One of the new fun parts of the game outside of battle is My Castle. My Castle is an expansion of the Barracks from Awakening, where your units can mingle with each other. In addition, My Castle serves as your base of operations, where you can freely walk around the castle, shop for items, increase support with other characters, relax in the hot springs, etc. You can place any of the available improvement buildings anywhere you want, and you can also upgrade them with gold to give better improvements.

From what I’ve noticed the animation is a lot smoother, and they’ve given the characters feet. The characters in Awakening were missing their feet for whatever reason, likely due to the team not knowing the capabilities of the 3DS. Now that they know, they were able to deliver a game that better pushes the 3DS. If the cutscenes look as good on the 3DS as they do in Nintendo’s videos, then that’s another plus. The cutscenes and general art look fantastic.

I suppose I’ll also take a minute to discuss some of the controversial localization decisions. It’s been the source of multiple news stories over the last month, particularly over the issue of the exclusion of the Skinship mini-game. In the Japanese version, you could invite characters to your private quarters where, after a bit of head-patting, their support with Corrin is raised. I suppose this was deemed too weird for the West, so this head-patting game was removed but getting the support increase was retained. I am not a fan of anything getting censored or removed even if it is weird, so this change did not make me happy. However, the support increase is still there which does salvage it a bit. There is also no dual audio for the game despite Awakening having the option.

If you’re a fan of Fire Emblem, I feel like it would be a crime to miss these games. The fee for getting the full experience is high, but I feel like this story could be worth it all. Just the set-up alone is enough to encourage multiple playthroughs of the game to experience the epic story these games look like they’ll provide. If you’re on the fence, you can wait and see what other players say, but I feel like these three games will be something special and an experience that shouldn’t be missed if you have a 3DS. The game releases next week on February 19 in North America, and later this year for Europe.

Are you ready to choose your fate?