American restaurant chain Domino’s Pizza has just launched an iOS app in conjunction with Vocaloid Hatsune Miku as displayed in this video. In the video, Domino’s Japan President Scott Oellkers goes through the app’s features in a lighthearted, quirky little video made to promote the app’s launch. The app itself consists of a variety of features, as demonstrated, including the ability to pose Miku and take a photo with her, or better yet, if you order a Domino’s Pizza, and point the camera at the box lid through the app, the lid will turn into a live dance floor where Miku busts a move for the user! Fortunately for you guys, Tomoki has an iPod Touch and thus got his paws on the app for an exclusive, hands on look, including screenshots! 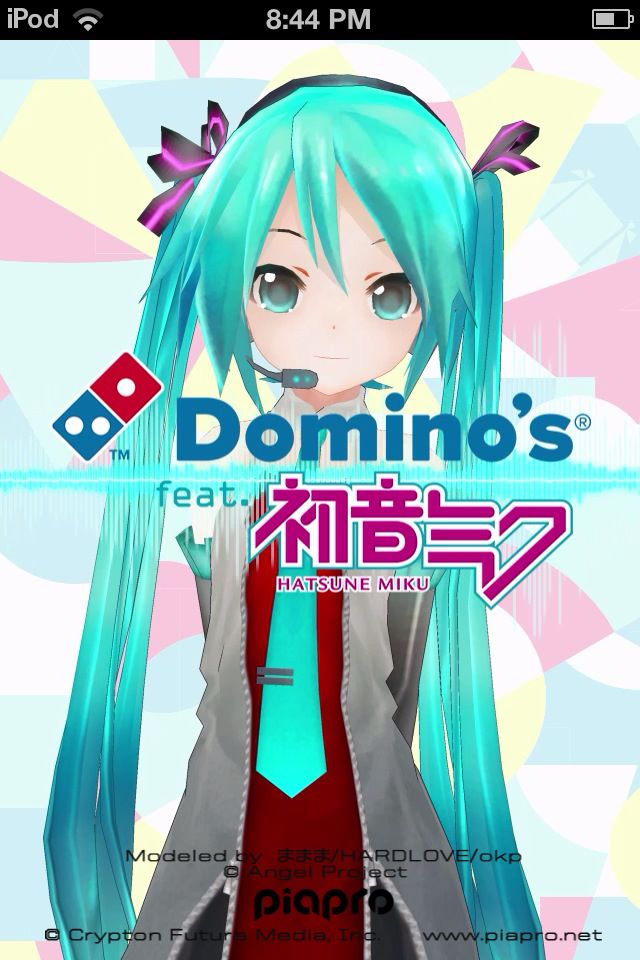 After a short animation, Miku appears on the screen followed by the Domino’s logo, and she sings the Domino’s Pizza tune in her signature voice. She both looks and sound adorable during the introduction. Promising start! However upon delving further into the app I began to face a little confusion. 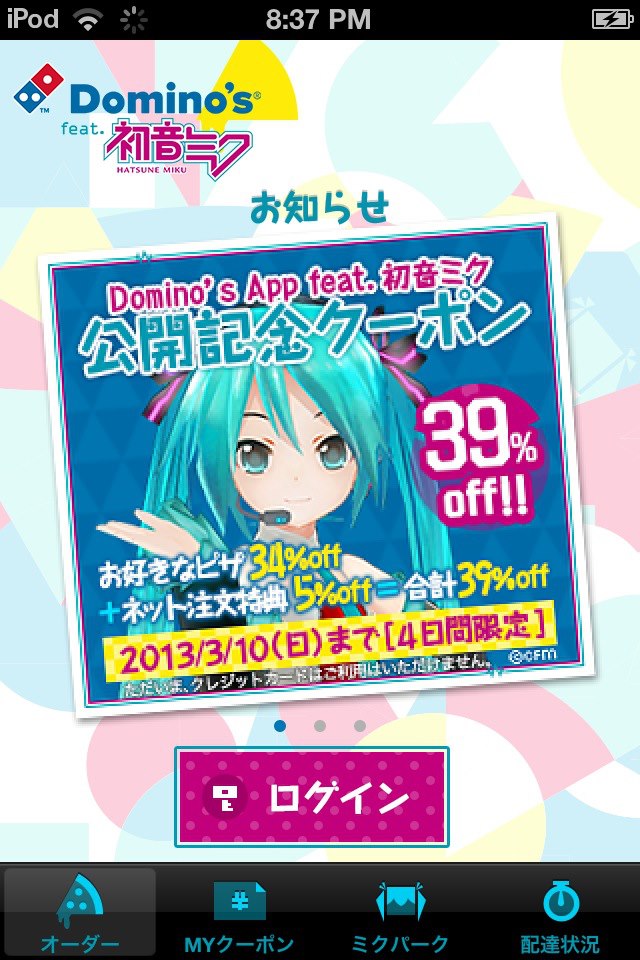 The first among four tabs – with the pizza insignia – seems to be an introduction page with just perhaps some basic information as to what the app does. Bear in mind folks that I cannot read Japanese, therefore your guess as to what the writing says is as good as mine! And it just gets more confusing from here. 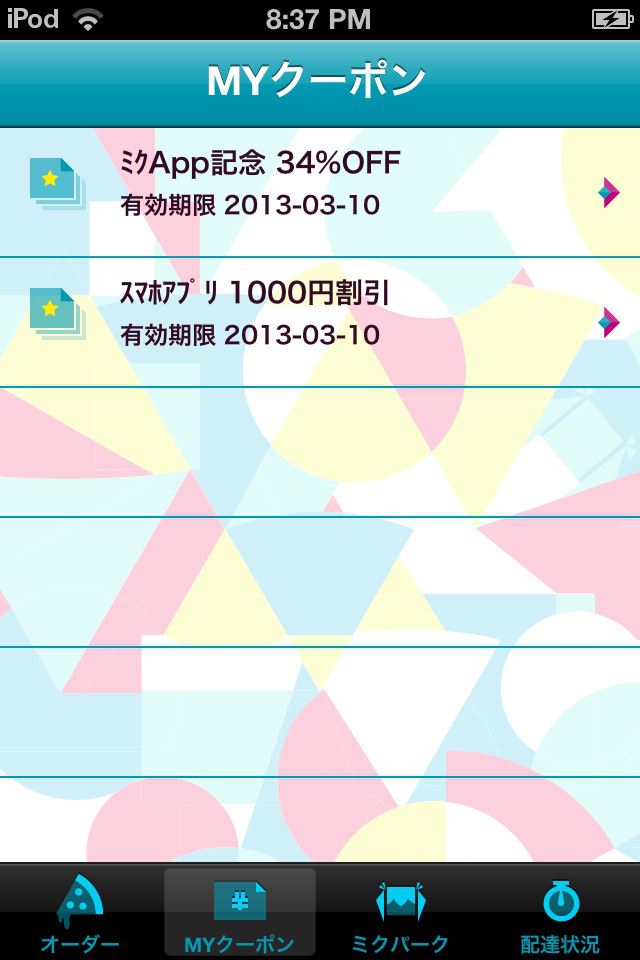 The second tab – the one with the letter, or mail sign – seems to hold notifications, as we can clearly tell some dates are displayed here. It could be a messenger of some kind, though this was not mentioned during the video. The letters “MY”are written under the tab, so that would lead one to assume this is customizable perhaps? Again, I’m just guessing here! 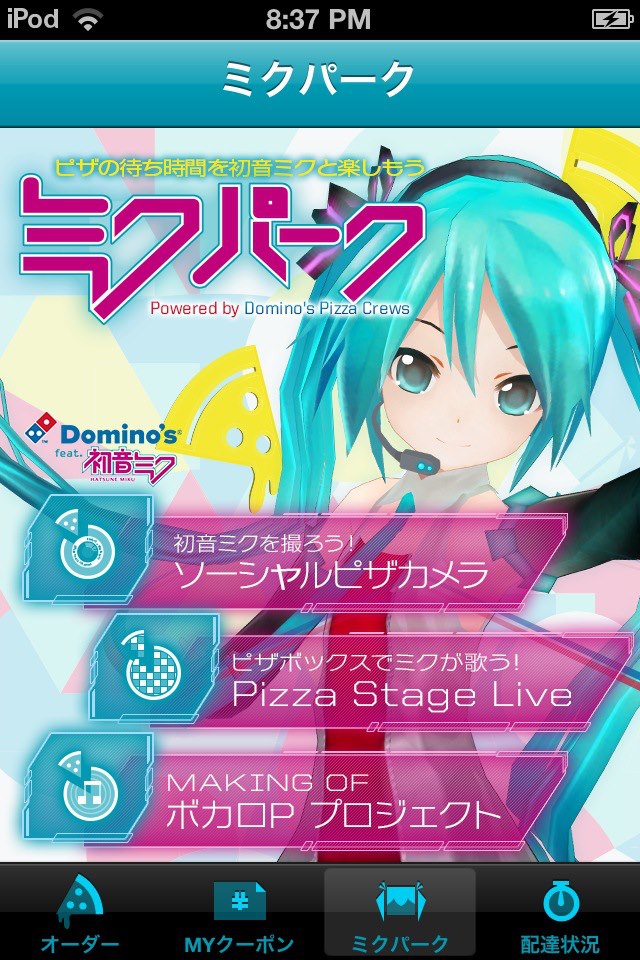 The third – and most interesting – tab, with the little Miku symbol is the one with all the goodies. Both the box top dance floor feature as well as the Miku posing feature are in this tab, the top one being the photos feature while the second one is the dance floor one. The one called “Pizza Stage Live”. 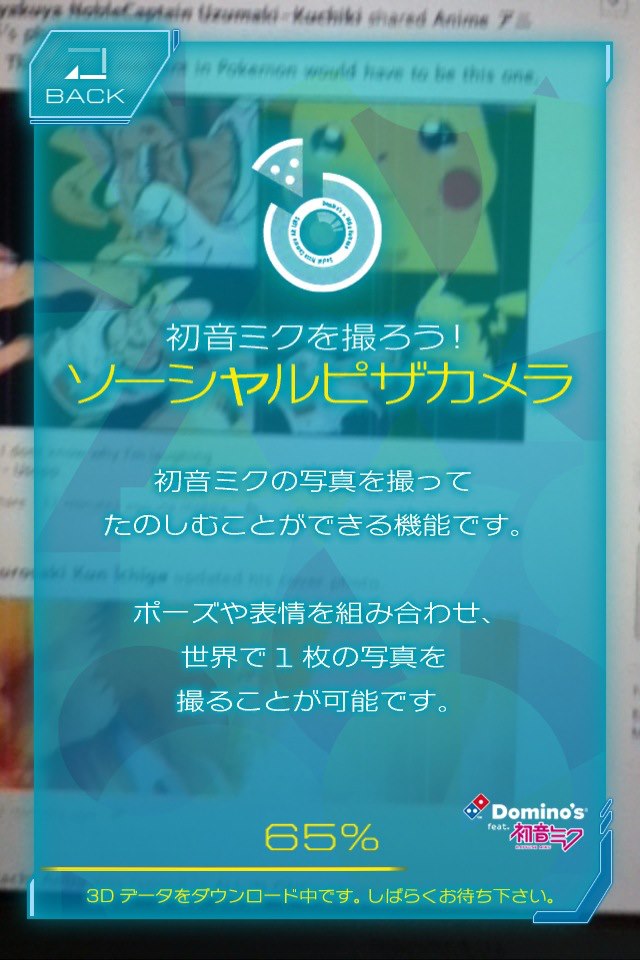 After selecting the photo and Miku posing feature, a loading screen with what I assume are instructions appear and the camera on the device activates. In this particular case you are being treated to a view of my Facebook newsfeed. See if you can make out what is going on back there, because I sure can’t! 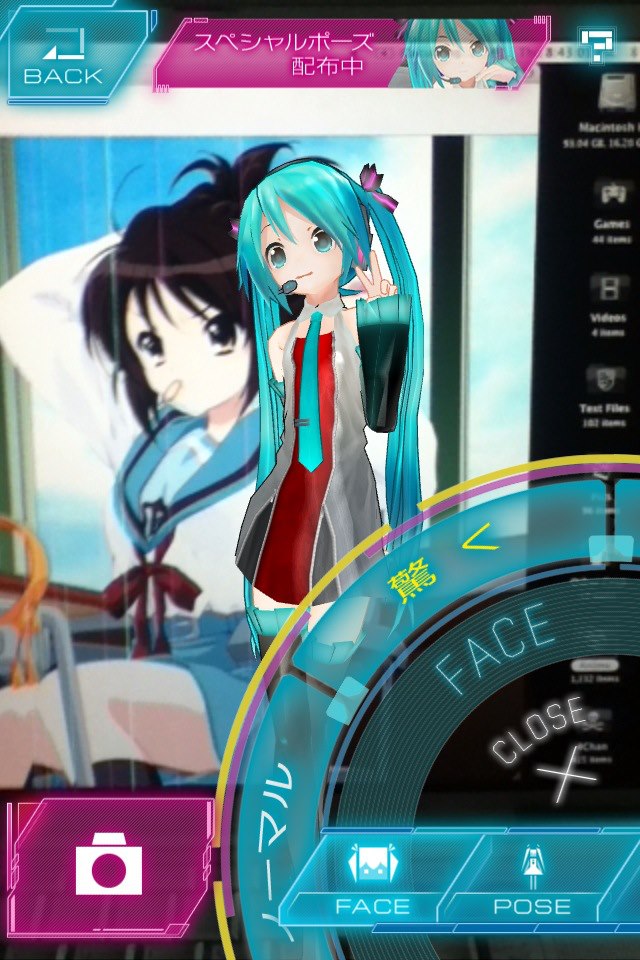 Scrolling through the outer wheel with the “Face” option selecting changes her facial expressions. There are no more than three or four in total, but each one is cute in it’s own right. I can definitely tell I’m going to have fun with this little feature! You can see some Haruhi going on in the back there too, getting ready for the photo! 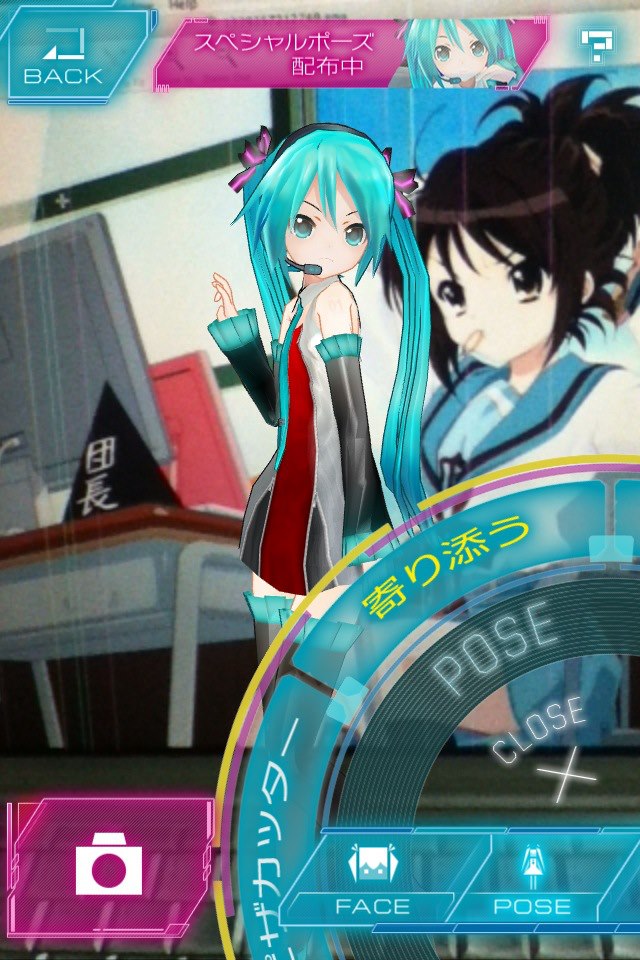 When switching over to the “Pose” option, you can – as one would guess – switch her pose, as I just did for your viewing pleasure. I’m not entirely sure what she’s meant to be doing, here but there are three or four of these too, including one where she’s sitting or leaning on something, meaning you can really get creative with this when posing her. 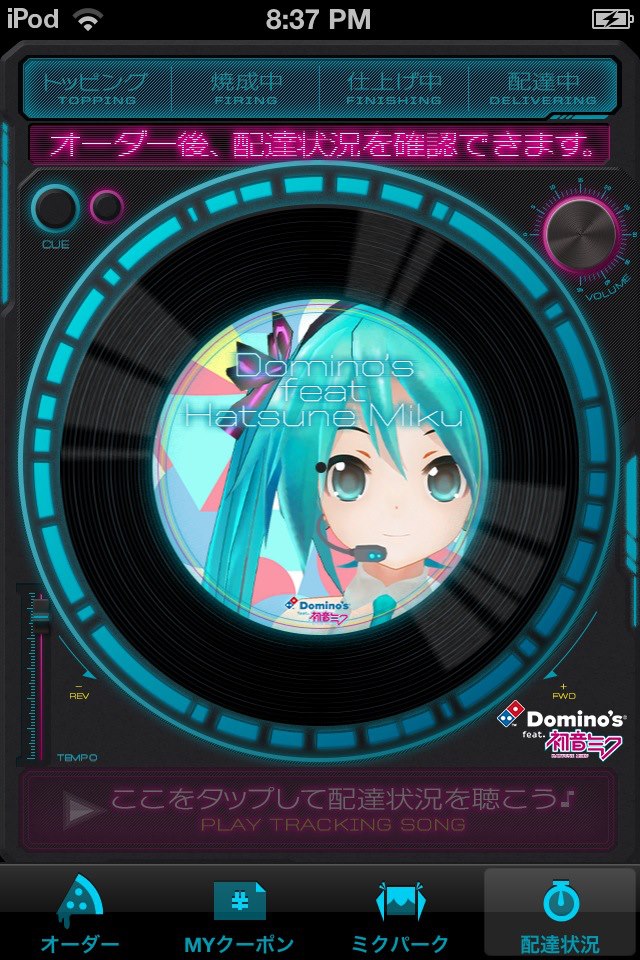 And finally, this is the fourth, and last tab with the timer icon. This is arguably the coolest looking tab, however for the life of me I cannot figure out what it does. I tried selecting everything that looked like a button, but nothing happened. I don’t think it’s just for show, I’m sure it has some use, but I definitely can’t tell what it is. Perhaps it’s supposed to load? The “Play Tracking Song” written below gives the impression that it’s sound related, so not something I could show in the form of screenshots anyway. 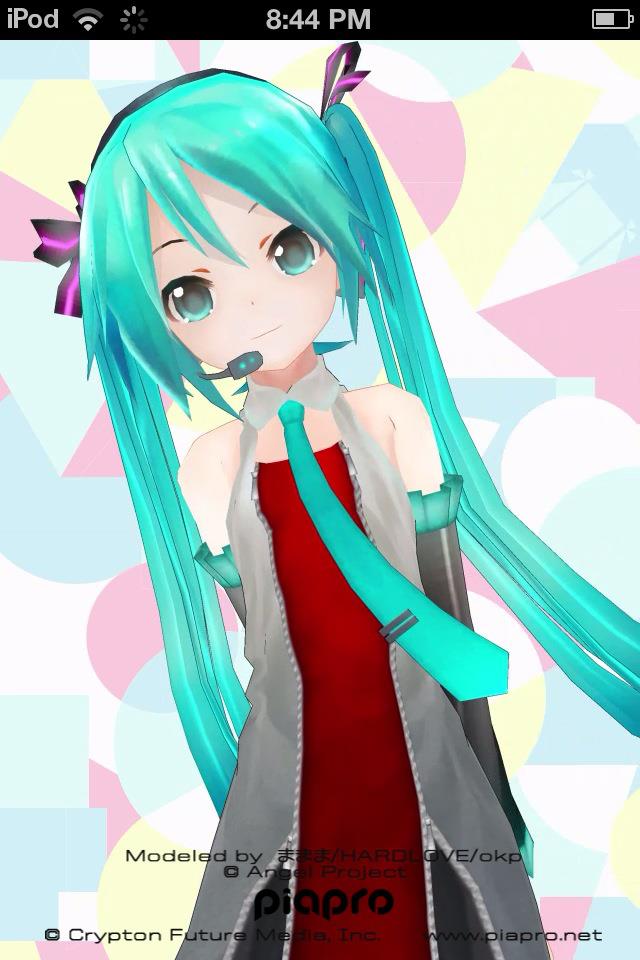 As much as I’d love to, I cannot show you the box top dance floor feature, as the Hatsune Miku Domino’s Pizza delivery is apparently only available in Japan, and I doubt they do international shipping! But here’s another shot of Miku during the introduction animation before the Domino’s logo shows up. So tell us, what do you guys think of the app? Any thoughts or opinions you’d like to share about this joint operation in Japan? Let us know in the comments section!