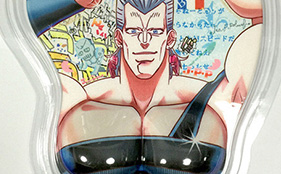 The manga specializing doujin shop, Comic Toranoana, have recently opened up pre-orders for the 3D mousepad of JoJo’s Bizarre Adventure’s Jean Pierre Polnareff. The 3D mousepad was also offered at the 17th Golden Blood doujinshi event which was held on October 18, 2015. and the illustration the mousepad is based on: