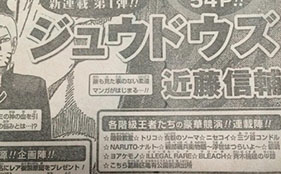 The 40th issue of Shueisha’s Weekly Shonen Jump magazine has announced that Hunter x Hunter creator Yoshihiro Togashi will not return in issue #41. He is still suffering from lower back pain and there is no exact return date given.

The manga went on a brief hiatus in July, and Yoshihiro Togashi resumed his manga in June after a hiatus of more than two years. The Hunter x Hunter 2011 anime series will also be ending this year on September 24.