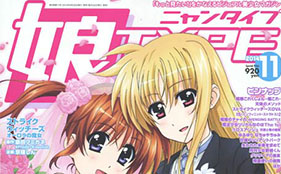 We’re back again and this time with NyanType’s November 2014 issue from JList. This issue contains a total of 20 great posters along with previews, character profiles, articles, manga, and other great content. Most of the anime posters are anime series that have recently ended during the Summer 2014 anime season or brand new anime series which recently started airing during the Fall 2014 anime season.

This issue can be purchased here, more info on where to purchase the magazine will be at the bottom of this post. My favorite posters from this months issue would have to be Amagi Brilliant Park (The food looks delicious!), Fate/kaleid liner Prisma Illya (Chloe is cute and strong) and Grisaia no Kajitsu (Who doesn’t like juicy grapes?).

You can purchase the issue I covered in this post here or you can subscribe to JList‘s NyanType subscription service for $12~$30/month here. All sales made through JList help us continue to bring unique content to the site as well as supporting us!

If you want us to review a different type of magazine each month, let us know. Also if you had the chance to win a poster or two from above, what would it be and why? I’m curious to know what posters anime fans would want on their wall. Let us know your thoughts in the comments below!