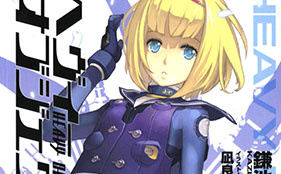 During the Dengeki Bunko Aki no Saiten (Dengeki Bunko Fall Festival) event on Sunday it was announced that a television anime adaptation of the Heavy Object Light novel series by Kazuma Kamazhi (Toaru Majutsu no Index, Toaru Kagaku no Railgun) has been green-lit. In addition to this announcement, some of the main cast were revealed:

A promotional video was also streamed: