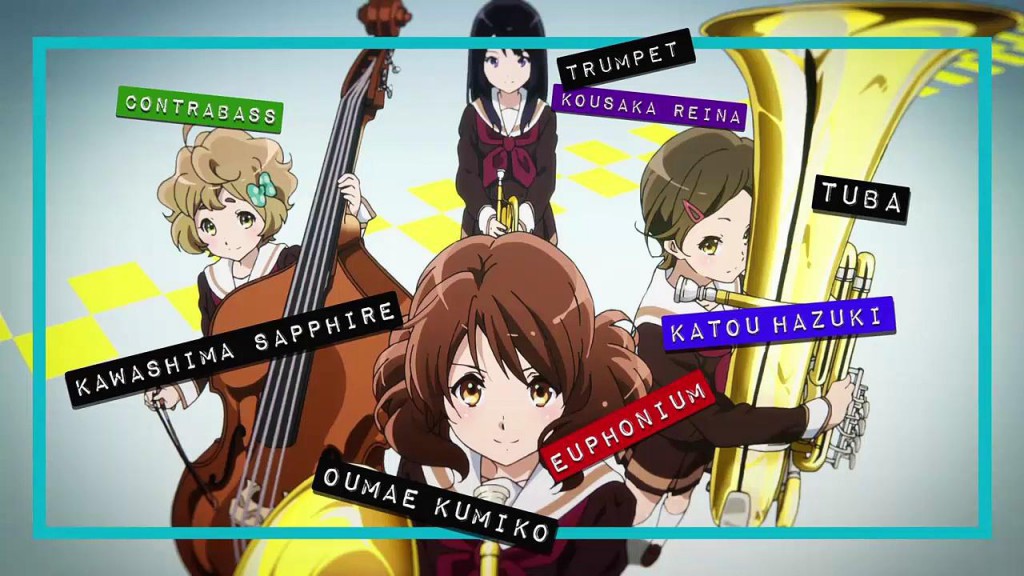 As the animation studio to almost single-handedly made moe the standard artstyle in today’s anime world, Kyoto Animation has developed this reputation as that studio that makes moe characters its focal point for their anime. The past couple of years have done nothing to reject this fact. However, I recently had the pleasure of visiting Japan and I made the stop to the area around Kyoto Animation’s studio, including their own store. As far as I know, they’re the only animation studio that has their own store to sell their merchandise, aside from perhaps Studio Ghibli. Kyoto Animation is bigger than most of you guys may realize in Japan, which is why whatever they come out with becomes a big deal in Japan. But enough with the backstory, let me dive into why I told you guys this.

When Hibike! Euphonium was announced, I think it was hard to shake the stigma that it was just going to be another comedy, moe slice-of-life anime from Kyoto Animation. After all, they’ve been doing it for years, so I don’t blame people. The PV art that followed didn’t change anyone’s minds. I myself remember calling it “K-On! Ensemble Edition” when it first came out since it seemed that was what we were going to get. I’m glad that me, along with everyone else, couldn’t have been more wrong.

Kumiko Oumae is a drifter; she’s not really sure what she wants to do in her life. The only real passion she has is playing music, but she is starting to lose interest in that as well. Back in junior high, after Kumiko’s school band failed to make it to Nationals, one of her bandmates, Reina Kousaka, is upset that they failed. After Kumiko blurts out to Reina if she really thought they were good enough to make Nationals, a rift opens up between the two. In high school, Kumiko is dragged into the high school band by her two new friends, Sapphire “Midori” Kawashima, and Hazuki Katou. During the first meeting, Kumiko notices Reina has also gone to this high school and they still haven’t made up. Kumiko feels awkward about what she said to Reina back in junior high. This anime follws Kumiko as she goes through band practice and her attempts to try and make up with Reina.

This premise doesn’t seem like it would be anything too special. You might even try to compare it to K-On! already. However, what Hibike! Euphonium has that K-On! doesn’t, is an actual story and character development. Hibike! Euphonium is about music, first and foremost. Early on, so a bit of minor spoilers here, the band decides that they would like to try and make it to Nationals. This sets the tone of the anime to be a more serious one, as Hibike! Euphonium‘s plot doesn’t mess around. I’ve personally never been in a band past elementary school, but others have told me that this is a very accurate recreation of how an actual school band is like. There is politics, drama, and more than a little competitiveness. The need to be good enough to compete at Nationals for this band that played for nothing but fun before has an impact on those who used to be in the band in previous years, and not all of them take the push to be good enough at Nationals well. This leads to interesting character dynamics. 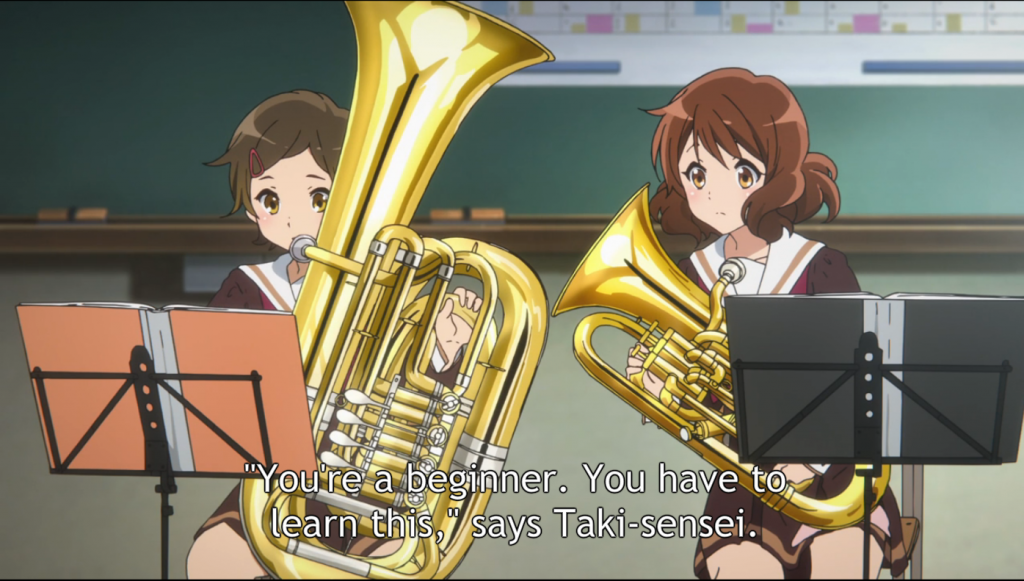 The ending of the anime does leave it open for a second season in the future. Perhaps a little too wide open. The anime feels a little incomplete by its end. I always felt this anime would be a two-cour anime, so I was disappointed when it ended after 13 episodes. That being said, the anime doesn’t feel rushed and it was a very natural progression to the end. The place they ended off with still felt like a good ending, but it does feel like it ended early. My hope is that they conclude the story with a second season in the future.

Hibike! Euphonium also had a good cast of characters. Early on, Hibike! Euphonium‘s cast of characters feels pretty standard for a KyoAni anime. As the anime goes on though, you start to see the pressures of becoming better reflected in each character as the series goes on. In order to not spread themselves too thin, the story only focuses on about a third of the band members, but all of them, by the anime’s end, have been developed in some way. The diverse cast of characters will surely mean you will have a favourite by the end of the anime. A few characters do get more development than others, and even some of the supporting cast develops more than the main cast. The end result is characters that feel real. These are characters with real feelings and are motivated by their own musical backgrounds. However, Kumiko and Reina would enjoy most of the spotlight in this anime. As the two with the most background, they had to work things out from junior high. Kumiko and Reina’s relationship in the anime is the other major focus point and it does have a nice buildup and final conclusion. The two of them build off each other really well, and they become a great pair by the end of the anime. Reina and Kumiko would become the stars of the anime by its end, with their stories flushed out really well. The theme this anime nails is getting the support from others around you to go forward, and succeeding if you do put in the effort. 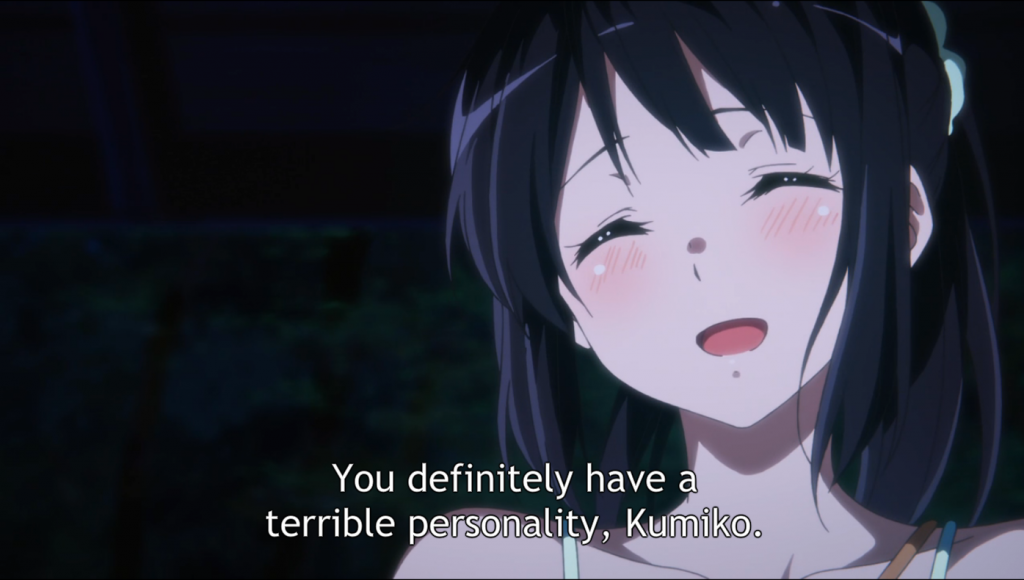 Hibike! Euphonium is very well-paced and with a great cast of characters that develop over the course of the show. Unfortunately, the ending is a little premature and it really feels like a two-cour anime that got cut off at 1-cour.

Regardless of whether you’re a fan of Kyoto Animation or not, you have to admit their anime consistently look good. However, Hibike! Euphonium is different. It doesn’t just look good, it looks absolutely fantastic. Almost every scene has a crazy attention to detail from the backgrounds, to the lighting, to the characters themselves. During some of the more important scenes, the art and animation look like they were taken out of a movie with how great everything looked. You will know when these scenes occur because of how much they stick out from the rest of the anime. Another thing fans pointed out early on was the unique faces of each band member even if they were never introduced at all. That kind of work will be recognized by those watching.

The same amount of work that went into the art also went into the animation. Their anime have consistently above-average animation on a regular basis. However, Hibike! Euphonium raises the bar; so much so that I may now have to re-evaluate how I rate animation. The times it really shows is when they’re playing their instruments, and the aforementioned important scenes. Some of these important scenes are movie quality and this is where you can see the amount of work that went into the animation. In fact, let these GIFs show you what I mean. These are just a couple of scenes where the art and animation go from being pretty good to just fantastic.

The last time Kyoto Animation truly wowed me with their animation in a TV series was the fight scene in episode 2 of Kyoukai no Kanata. So it has been a while since I’ve seen one of their works and it really impressed me from an animation perspective. Even then, that was only one fight scene. Hibike! Euphonium has quite a few of these impressive scenes.

This is easily my favourite Kyoto Animation work when it comes to this department. I really can’t stress enough how great this anime looks.

As a music anime, it should be obvious that the music is done well. Hibike! Euphonium has a great opening song in “Dream Solister” by TRUE, and an almost typical cheerful KyoAni ending song in “Tutti” which is sung by the four main female cast members. However, the real good part about the music department is listening to some of the classic songs that they play early on in the anime before deciding on their final piece. Otherwise, the music is pretty standard, with some of the better pieces playing during some of the more dramatic scenes.

Rookie voice actresses voice the main characters with more well-known voice actors doing supporting characters. Typically, this is how Kyoto Animation operates when it comes to their voice actors. The voice actors do a good job with their characters but there wasn’t any real standout performances… except for one. Tomoyo Kurosawa did an excellent job with Kumiko, especially later on in the series in a few scenes.

This is easily the best anime Kyoto Animation has made in a long time, and I’m telling you this as a longtime fan of their work. It’s hard to really find an obvious glaring flaw in this anime aside from the open ending. The story and characters are done very well, the visuals are outstanding, and the music is good. This is everything you could possibly want in a good anime and it is saddening to me that it started off with the reputation that it would just be another K-On! As a result, not many people wanted to try it. I’m here to tell you: try it. If you’re looking for a good music anime, this should be next on your list. If you are even remotely interested in this, I would say to give this a watch. I can’t guarantee it, but you probably won’t be disappointed with what you find here. This is a beautiful return to form for KyoAni.

Am I alone in being this excited over what I just watched? What were your thoughts on Hibike! Euphonium? Have I convinced you to give this anime a try? Let me hear you in the comments!