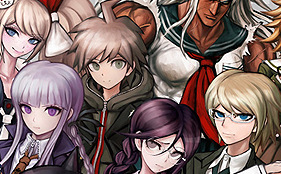 Thanks to NeoGAF user Chairmanchuck, several titles have been revealed to potentially release on the Steam PC platform. SteamDB, a site dedicated to keeping track of updates that appear on Steam’s database, lists an interesting armada of possibly upcoming releases.

Most notably, Danganronpa: Trigger Happy Havoc and its sequel Danganronpa 2: Goodbye Despair have been listed for both a developer comp and a beta test key. It’s unique to see a primarily handheld series grace the PC landscape, even with titles such as the enhanced Re;Birth ports of the Hyperdimension Neptunia series which first released on the PlayStation Vita. XBlaze Code: Embryo, the prequel to Arc System Works’ fighting game series, Blazblue, also makes an appearance in the database, alongside PlayStation Vita brethren Criminal Girls, Ray Gigant, and Steins;Gate.

Additionally, Final Fantasy X/X-2 HD Remaster might also be on its way to your PC with a store/CD key being registered under the title. Steam averages upwards of 10 million concurrent users a day, thus it’s no surprise that developers and publishers alike are beginning to expose their title to Valve’s hugely successful marketplace.

Following suit, the internet quaked with a leak showcasing that a developer comp, beta key, and store key were registered – though quickly deleted – for the fabled Half-Life 3.

This information is, without a doubt, the most concrete evidence towards the existence of the next entry in the acclaimed Half-Life series. Could Valve be preparing to finally open the floodgates on their most anticipated title? Will E3 2016 be the moment we finally get to see, with our very own eyes, what has been sought after for almost nine years? You can count on Valve to leave too many questions left unanswered whenever Half-Life 3 is even slightly teased at.

Here’s the full list of what has been shown, so far, from SteamDB’s registry: