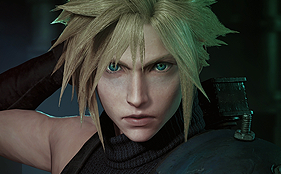 The PlayStation Experience 2015 conference kicked off with an opening keynote, much like last year, with a keynote to present the audience with games they’ll be able to play on the show floor and upcoming releases on the PlayStation 4. Among these announcements, such as Ni No Kuni II: Revenant Kingdom and Ace Combat 7, came an unexpected surprise with Square Enix shocking the masses with a gameplay reveal for their upcoming, from-the-ground-up remake of Final Fantasy VII.

The trailer features main characters Cloud Strife and Barret Wallace working together to destroy one of Shinra Electric Power Company’s Mako reactor, despite clashing personalities. Cloud and Barret both trade quips along the way with other members of the insurgent group AVALANCHE such as Wedge, Biggs, and Jessie.

Cloud eventually finds himself pushed to a corner as he’s chased down by Shinra’s Peacekeeping Troops. One scene, in particular, proves pivotal to the plot of Cloud’s backstory with distorted glitches plaguing the screen as Cloud experiences pain as he begins to remind himself of his past.

Following suit, the trailer jumps right into the action as we experience combat both from Cloud and Barret’s perspective. The famous introduction of Cloud, where he takes a leap from the train heading into Midgar, wraps a beautiful ribbon around the trailer as its outro scene. Once the audience takes a deep breath to assess what they just witnessed, producer Yoshinori Kitase and director Tetsuya Nomura began to take the stage.

While on stage, Kitase mentioned that “the team is currently hard at work on… Final Fantasy VII Remake” and that the team is “continuing to develop the game and are finding new ways to update the content as we revisit it.” Nomura followed Kitase’s statement, adding that he’s “looking forward to updating you with new and surprising updates regarding this game.”

Looking into the combat system, it appears to be real-time – much in the vein of Final Fantasy XV –  though producer Yoshinori Kitase said that he “can’t say the new game is completely action-based.”

“It has more of that element and real-time than the previous game. However, what makes Final Fantasy and RPGs different from other games is that the players have the ability to choose weapons, capabilities, and magic to be strategic minded. So while the new game has more real-time elements, it will also maintain that strategy building element, balancing these two factors perfectly to enhance the gaming experience.

“The way we harnessed the power of the PlayStation 4 was to maintain the graphic quality of characters like Cloud, Tifa, and Aerith in the movie called Advent Children in our game, and this was the starting point,” Kitase said, in regards to the graphical fidelity of the Final Fantasy VII Remake.

“So, what we’re aiming for with the Final Fantasy VII Remake is to have the same quality of these characters in real-time while playing the game, and this is only achievable with PlayStation 4.”

Final Fantasy VII Remake does not have a release window as of yet, though it will make its console debut on PlayStation 4. To keep you busy until its inevitable release, Square Enix has released the PC port of the original Final Fantasy VII on PS4 which comes with a theme modeled after the remake’s E3 2015 reveal trailer.