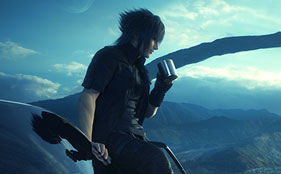 Square Enix has unveiled a new video at the 2014 Tokyo Game Show for Final Fantasy XV, the next major anticipated instalment in the Final Fantasy franchise. The trailer itself previews new gameplay footage from the game as well as a new feature to the franchise, driving a car road trip style. The game is set in a near future world based on modern Earth, with various countries and continents that have engaged in war over the crystals. Only one crystal remains and is located in Lucis. Players will be playing as Noctis Lucis Caelum, the prince of Lucis who has a strange mystical power.

Final Fantasy XV will be releasing on Sony’s PlayStation 4 and Microsoft’s Xbox One. No release date has been announced so far.

The game’s website has released a new key visual: