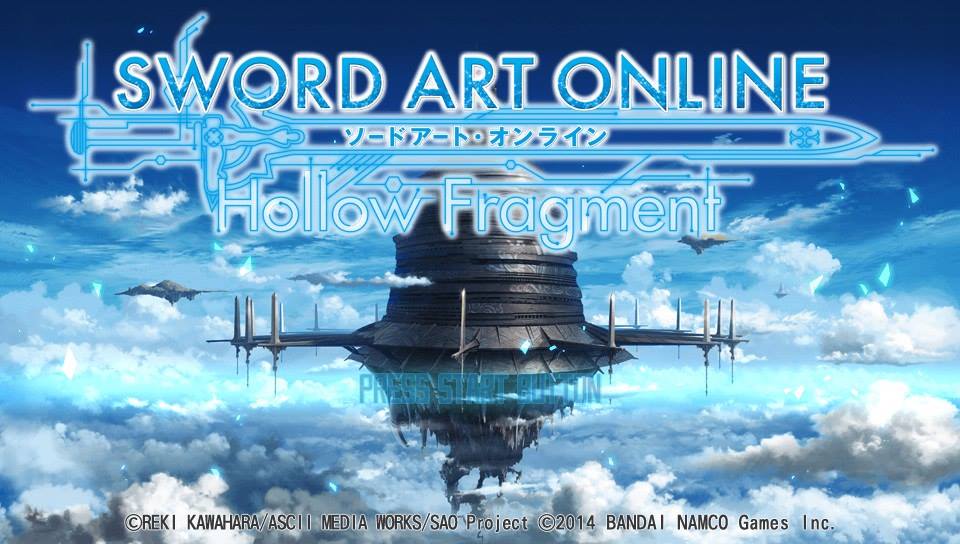 These past couple of years have been great for Japanese game localization. An absurd number of games have made their way West. There were probably more niche Japanese games released in the past two years than all of 2005 to 2011 combined. Just this year alone has left me in awe of what kinds of games we’re getting. Games like Conception II, Senran Kagura, Akiba’s Trip, and Monster Monpiece are games I wouldn’t have thought would release here in a  million years. Sword Art Online: Hollow Fragment, is yet another game I would never have expected we would get. Games based off anime rarely get released here. Sure, there’s the obvious One Piece, Dragon Ball, and Naruto games that I would expect, however outside of that I don’t expect anything. So I was very surprised and excited, when Bandai Namco announced that they would be releasing Sword Art Online. The game released just a few days ago and I recently picked it up. Here are my initial thoughts on it.

*Note: I haven’t read or watched Sword Art Online. I have basic knowledge of the overall story, setting, and characters. My judgements are based purely off the game itself.

The start of the game takes place immediately after the Sword Art Online arc ends. However, instead of being logged out of the world after the 75th floor, Kirito and the other characters still remain in the world. During a solo exploration, Kirito is suddenly transported to the Hollow Area, a restricted area of SAO where he is attacked by a female player named Philia. After declaring a truce to defeat a Skull Reaper that appears and attacks both of them, Kirito explores around with his new companion. Kirito manages to find a portal back to Arc Sophia, but he and Philia agree to continue to search the area together later. Upon returning to town, Kirito gets mobbed by his harem of girls who couldn’t contact him during his time in the Hollow Area and he seemed to have disappeared from the game. Upon telling them about the Hollow Area, everyone agrees it might be a good idea to check it out for new drops and skills. The game opens up from there.

The objective of the game is still to leave the world by clearing the remaining 25 levels. However, there is still the Hollow Area to explore. The Hollow Area only allows two people to travel from there back to the rest of the game, which limits Kirito to one partner at a time. I haven’t tried just going into the regular world itself, but I think it will still limit you to one partner. As soon as you start the game, the game bombards you with explanations of battle. Basic combat, skills, partner controlling, and managing gauge use is taught all at once. I felt overwhelmed pretty quickly and I winged battles for the first hour or so before eventually looking up what to do in the e-manual of the game. One of the problems is that since you start at level 100, Kirito has all kinds of skills and moves. The brief tutorial only tells you what some of the skills do, not all of them. My partner kept asking me to stun the enemy I was facing, but I had no idea how to stun until I looked it up.

If you’re not familiar with the Japanese controls for most games, the controls in this game might throw you off at first. In Japan, the Circle button is confirm, and the X button is cancel. In North America (I’m not sure about Europe), Circle is cancel, and X is confirm. Navigating through the menus at first might be frustrating before you get used to how they work. It threw me off for a minute too, since I’m used to English games using the North American controls, but I adjusted quickly enough. The rear touchpad controls the camera which is awkward, because unless you have a grip for the Vita or something along those lines, you’re going to keep touching the touchpad with your fingers and adjusting the camera on occasion. Again, the game doesn’t tell you how to control the camera, so you have to look it up. Actually, reading the instruction manual before you start the game is probably the best idea. Once you have a hang of the combat, it is quite deep and fun.

The game is a RPG, but it has a lot of elements of MMORPGs, which is good as it maintains the roots of the series. Skills are mapped to buttons, and you can choose out of about 10 skills to map with the four face buttons. In this way, it also kind of sucks that it’s not on PC because you won’t be able to use all of your skills at any one time. However, I still find the basic skills you’re given works well enough. Your partner is AI controlled obviously, but you have some influence over how they use skills. By pressing Up on the D-pad, you can praise your partner. If you praise them after they use a certain skill or move, they’ll remember that you praised them for using that move, so they’ll use it more often. Praising also restores SP, which is needed for most skills.  Depending on who you choose, they’ll have a different style of fighting so pick your partner that bests suits the situation you’re given. Your partners will also ask you to perform a certain action. If you do it, you’re rewarded with your partner performing a powerful attack on the enemy. It’s worth it to listen to your partner to get in powerful attacks and raise their respect towards you. One other thing about the game: there’s no pause button, just like in MMOs. If you press Start, you’ll just be taken to a menu that pops up. You are still able to move around, and you can still attack as well. Enemies can also attack you too, so be aware that you can’t pause the game.

Aside from exploring the world, defeating enemies and collecting items, there’s also the other part of SAO: the romance part. Outside of battle, you can have chats with your partner, enjoy a snack, and hold hands which helps you grow more intimate with them. In this way, a part of the game behaves like a dating sim in which Kirito can hang out with his harem of female characters and choose one he wants to be with. Since I’m only at the beginning of the game I don’t know if improving relationships improves combat ability or if it does anything, other than giving the player some satisfaction. I would imagine there would be some gameplay benefits for being more intimate with the other characters.

The game itself looks decent for a Vita game, and the character models look great, but there are framerate issues. If there are a lot of enemies on screen, or if you walk through a busy part of town, the game slows down quite a bit. Combat is pretty smooth though, so I don’t have any issues with that. My biggest issue with the game is actually its translation. I’m a stickler for grammar – I have been ever since I was young, so this game’s text is driving me insane. With typos like “I you think you”, or “Nice in meeting you”, I just want to yell and scream at whoever wrote this, as well as whoever looked this over and approved it. I’m only a few hours in, and I’ve already come across at least 15 typos.  If this was the late 80’s in gaming, then it would be somewhat understandable. However, this is no longer the early years of gaming. We’re in 2014, where gaming standards are a lot higher. A game containing this many typos is no longer acceptable.

After a few hours in, Sword Art Online: Hollow Fragment is far from perfect, but it seems to be a pretty good game for RPG fans. However, I’d suggest waiting for the price to decrease before picking this up unless you want some Sword Art Online action right now. I can see this being a big hit with fans of the anime. As the game goes on, we’ll see how it comes along. This game may convince me to finally get around to watching the anime.

If you’re playing the game as well, what are your impressions of it after a few days of playing? Let me know in the comments!