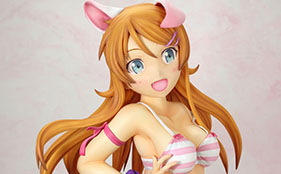 Kirino the main character from the popular series Ore no Imouto ga Konnani Kawaii Wake ga Nai (My Little Sister Can’t Be This Cute) by Tsukasa Fushimi gets a unique feature with this new figure. There are two versions of this figure, one is a standard regular version while the other is a “soft bust” edition.

The “soft bust” edition comes with everything that the standard regular version has but it also comes with super soft and realistic breasts which are you able to touch and squeeze. Both figures are 70cm (27.6in) in height and are made by Griffon Enterprises while sculpted by TEAM GENESIS.

Oreimo – Kirino Kousaka 1/2.5 Figure Soft Bust Edition Cat Ear ver. – Pre-orders for this figurine are available on JList and is expected to be released in Late April 2015.

Oreimo – Kirino Kousaka 1/2.5 Figure Cat Ear Swimsuit ver. – Pre-orders for this figurine are available on JList and is expected to be released in Late April 2015.