In addition to Buppa, smaller gangs – tribes, if you will – also square off in turf wars that comprise of two things: spittin’ verses and kickin’ asses (in no particular order). That is until two members of the Musashino Saru gang head over to Wu-Ronz territory for a brothel. After a brief confrontation (which ends in someone dying, so I won’t give that away), the stage is set for the biggest turf war Tokyo’s ever seen. 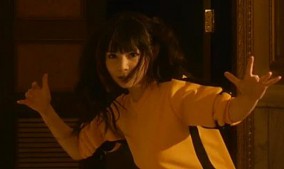 Sion Sono (of Suicide Circle fame) was clearly born to make this movie, if nothing else. You’ll find yourself at a loss trying to quickly describe this movie in a recommendation. It’s…well, a Japanese rap musical. Tokyo Tribes is – to say the least – the weirdest movie I have every seen. To say the most, I don’t think I’ve had this much fun watching a movie in a long, long time. Between the incredible rapping, weirdly vivid cinematography, well choreographed, ultra violent fight scenes, gratuitious nudity and upskirt shots (I mean if you cartwheel kick a dude in the face wearing a skirt, it’s bound to happen)… 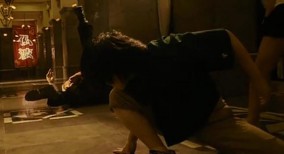 While the movie, in its all-inclusive glory, is a guaranteed cult classic, its not without its flaws. Often the drama that made Tokyo Tribes a hit manga, gets lost between rap battles (which are plenty). The story sticks pretty true to the manga, omitting some parts while dragging out others. At a modest two hours long, it seems to be over just as you’re getting into it. If you’re not on the up and up with Japanese rap (or Japanese music in general) a lot of it is going to sound super weird (admittedly Shota Sometani’s narration raps were pretty low key and monotone compared to the other rappers).

Check out the trailer below if you’re still not sold. Torrents are pretty scarce, and subs/SRTs are even scarcer, but its likely Viz or Funi will pick this up for DVD or BD. If you get around to it, enjoy – it is one hell of a weird ride. If you’re just here to see if GOOSH GOOSH made it into the live action movie, I’ll save you the trouble: He didn’t.

The Demon Girl next Door in Akihabara