Plug in your headphones and dust off your leek sticks, because Miku is back in a brand new iOS music player app! That’s right Vocaloid fans, MARZA ANIMATION PLANET INC. has created an application that allows you to take number “01” – Hatsune Miku with you anywhere you go in the palm of your hand as your own personal music partner. Now a lot of you might be wondering what that means; luckily MARZA provided us at Haruhichan with early access to the app for free so we could review it just for you guys! 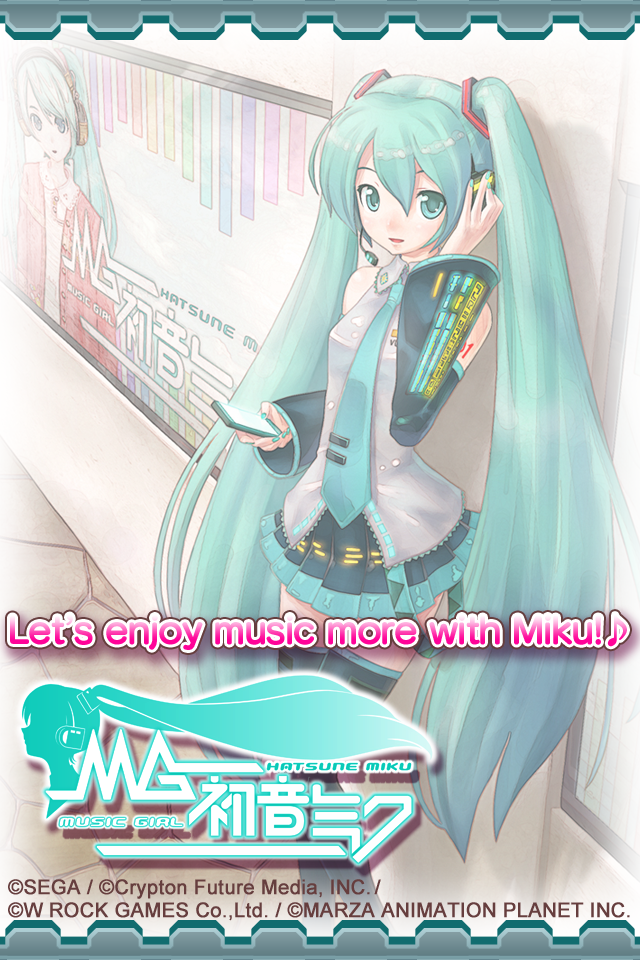 Let us begin with what this app even is. What is a music player app? Well, to over simplify it: It’s a reskin for your iOS music player. But that statement sells this app far short, as there is just so much more to it. It is not just a static image or set of images that take over the background – Instead, you have a beautifully modeled 3D Hatsune Miku created with CGI who is alive and interactive. She does everything from dance to the beat of the music, to occasionally ask you questions about yourself such as where you’d like to go when bored, or ask you what kind of movies you like, or where the Yeti is, as well as let you know more about herself by telling you where she is from, or what kind of candy she likes. She even high fives you every now and then! How to unlock these interactions? Spend more time with her! Listen to music with her, and she’ll grow to like you through a closeness meter in the top left corner of the screen. As the meter fills, you unlock interactions, which in turn goes towards another meter. Once the second meter is filled, Miku gives you a surprise gift!

Apart from dancing around and interacting with you, she speaks in her cute little voice (played by Saki Fujita) and even allows costume changes (costumes designed by Yuichirou Kojima). But enough talk, let us see what this app is really made of in a hands-on review. 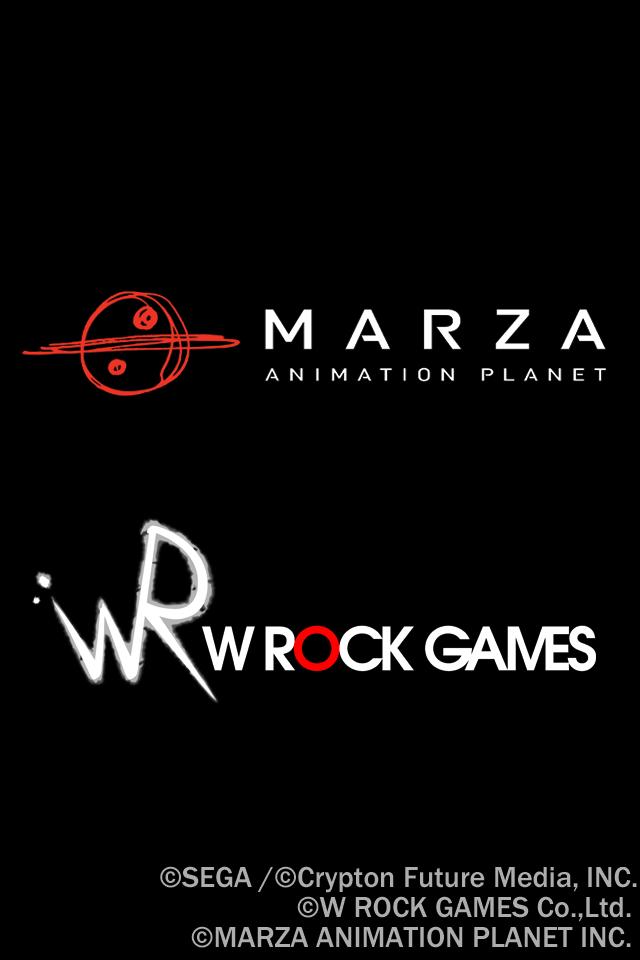 Upon opening the app you’re taken to the opening credits screen, displaying all the minds that went into creating this app. Fairly straightforward, and there isn’t much to talk about. 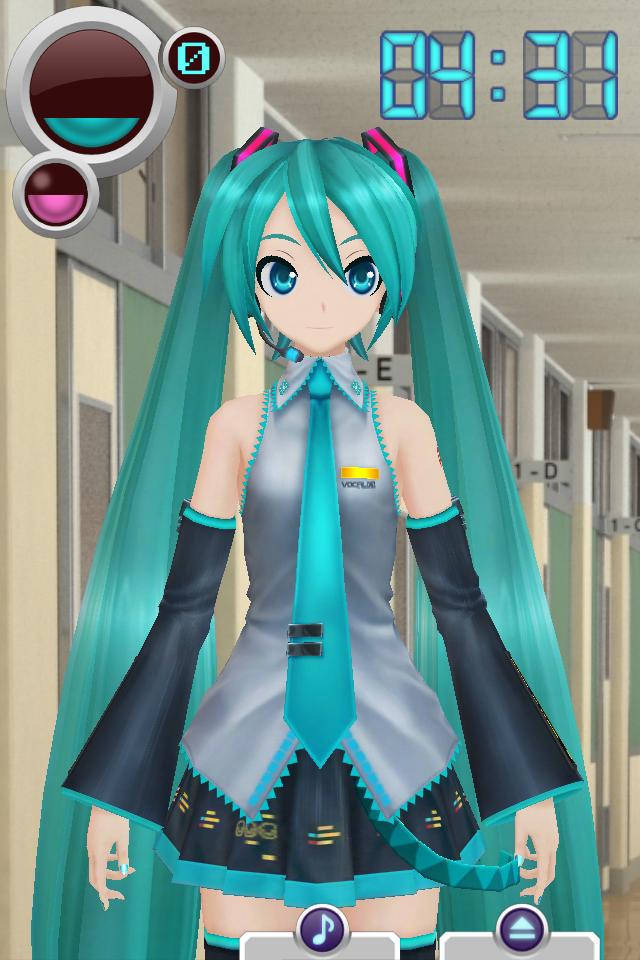 Lo and behold the mascot of Vocaloid – Hatsune Miku! This is more or less what you will be seeing most of the time while using this app. As you can see, she is in her signature grey, black, and turquoise outfit, and is wearing her headpiece with pink neon hair ties. This is the default look she has. At the moment she is just standing there (but still animated – she is not a still figure) as I have not yet played any music. The blue circle on top is the closeness meter while the pink one is the gift meter. The digits on the top right of the screen display the time in military format (yes, I was doing this at 4AM) while the middle bottom tab brings out the music display and the right one brings out the shop and menu icons. Fairly simple and straightforward. She looks so cute! 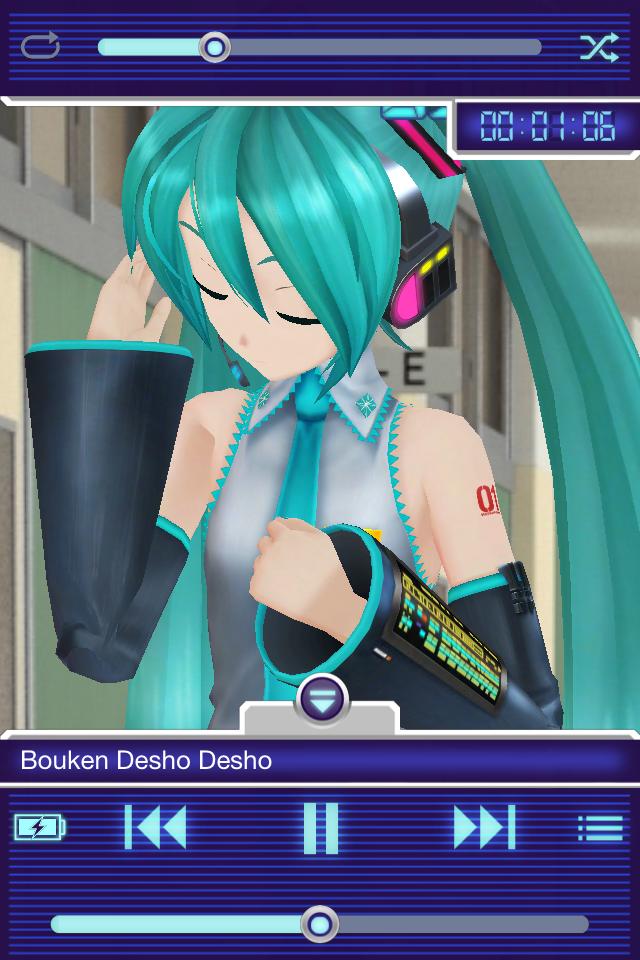 The HUD that is now visible is what is shown once the music tab is clicked. You are shown your own music library and asked to make a playlist for her (alternatively, you could simply add all songs, which I have done with zero performance issues whatsoever). Being Haruhichan, I thought I’d start off with “Bouken Desho Desho” as the first song, which – as many of you know – is the opening theme for the first season of Melancholy of Haruhi Suzumiya. (I’ve linked the song in its title so you guys can visualize what is going on onscreen to the sound of the music)

Miku switches on her headphones and begins enjoying the beat of the music. She has a series of little dance moves she uses and can be seen moving to the beat, and one can even see her lips moving at times as she quietly tries to sing along. It is quite an adorable sight indeed! 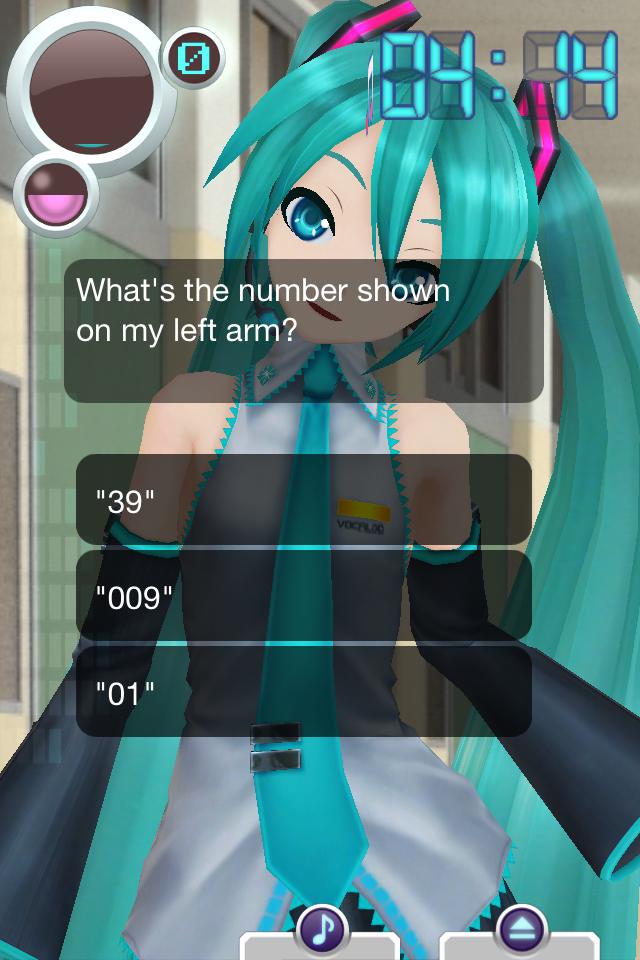 Here is one of the interactive events that pop up when the blue bar fills. Once it is filled, you click it, and the event begins, which leads to a piece of dialogue by her followed by a series of possible answers you can select. In this case, she is asking you a little trivia question about herself – but even the dullest of Miku fans knows the answer to this one. Do you? 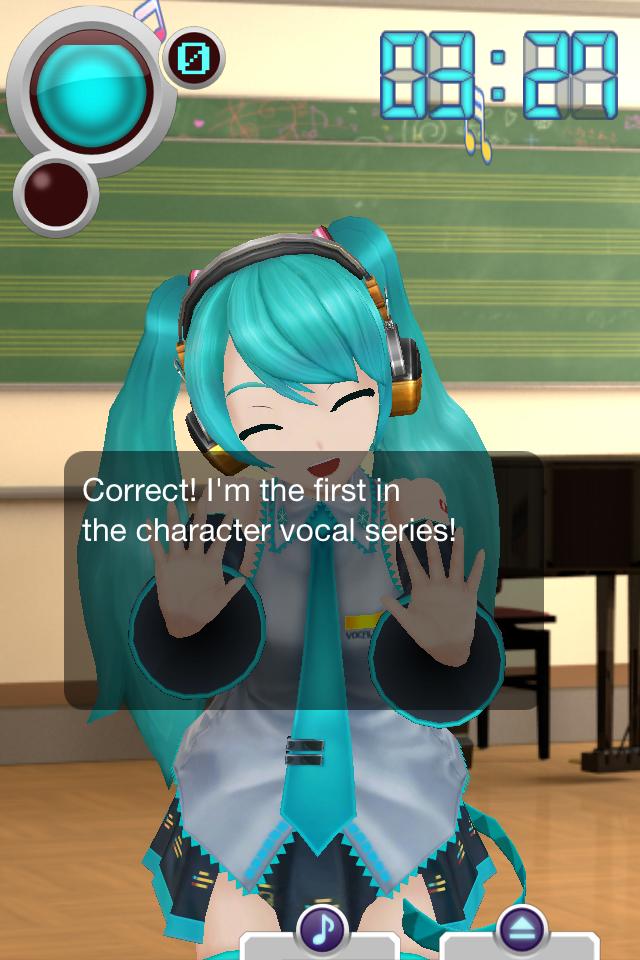 Looks like I was correct! Every time you choose an answer, she reacts accordingly – happily if she likes what you’ve said, and sad if she doesn’t. This then corresponds with how quickly the gift meter fills up. This somewhat reminds me of the Nintendo 64 game Hey You Pikachu where players have a pet Pikachu and seek to care for, nurture, and please it. This aspect of Music Girl Hatsune Miku is very similar to that game. Anyone who has played a pet game such as NeoPets would know the drill.

As you might be able to tell, she is wearing a different set of headphones in the above screenshot. This is one of a series of costume changes you can make. You can change her dress and hair separately, or together as a set. 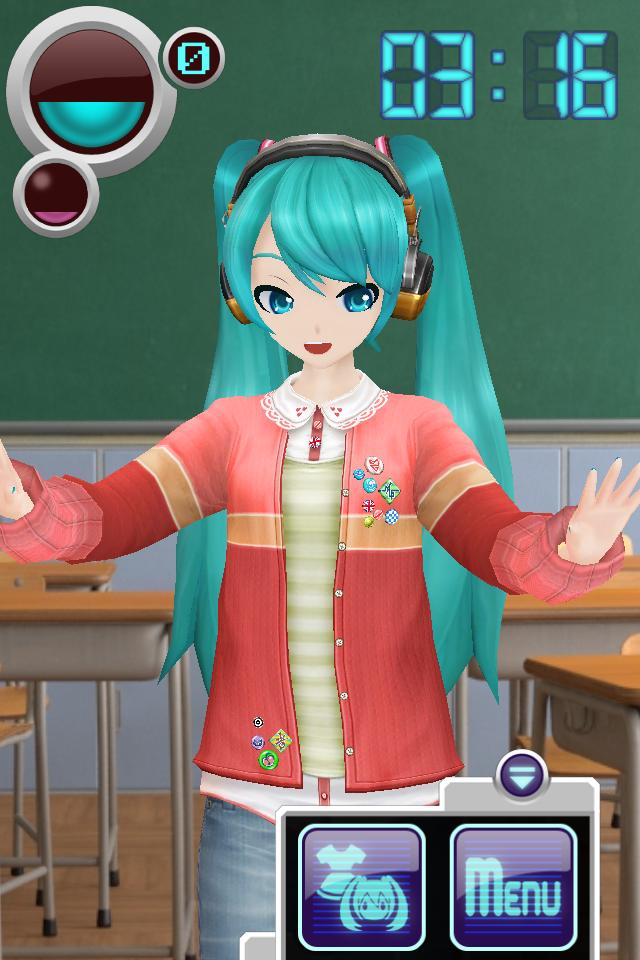 This is the second costume set she has. As you select it, she puts it on instantly before checking out her new threads. The summer outfit is so cute! When the costume changes, the background does as well! Before, she was in the hallways of a school, whereas now she is in the classroom itself. The tab that is visible is what is shown when the menu tab is selected – the left button being the shop and the right one leading to the menu which has details such as sound options, the tutorial, the about page, etc. 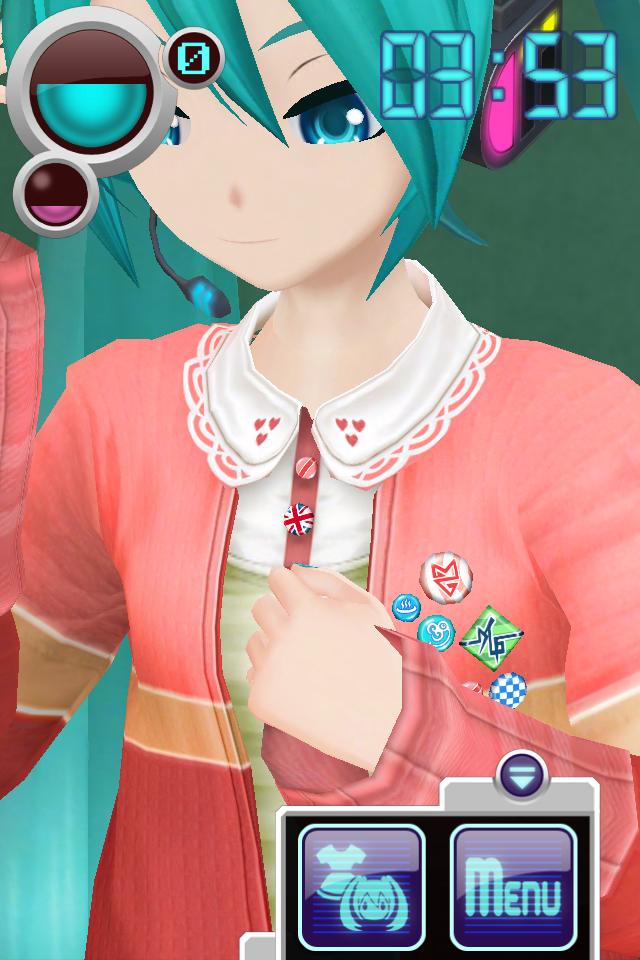 Interactions with Miku are not restricted to the events that pop up as a result of the meter being filled. When your finger is pressed against the screen, Miku looks in that direction. As you drag is around, her icy blue gaze follows it around in wonder. The camera pans with your finger movements, and you can make her nod, shake her head, or roll it in circles if zyou so desire! Moreover, you can zoom in or out. Upon zooming in on this outfit however, I noticed one of her pins was a picture of the Union Jack – more commonly known as the flag of the United Kingdom. Nice little treat for all you British fans! 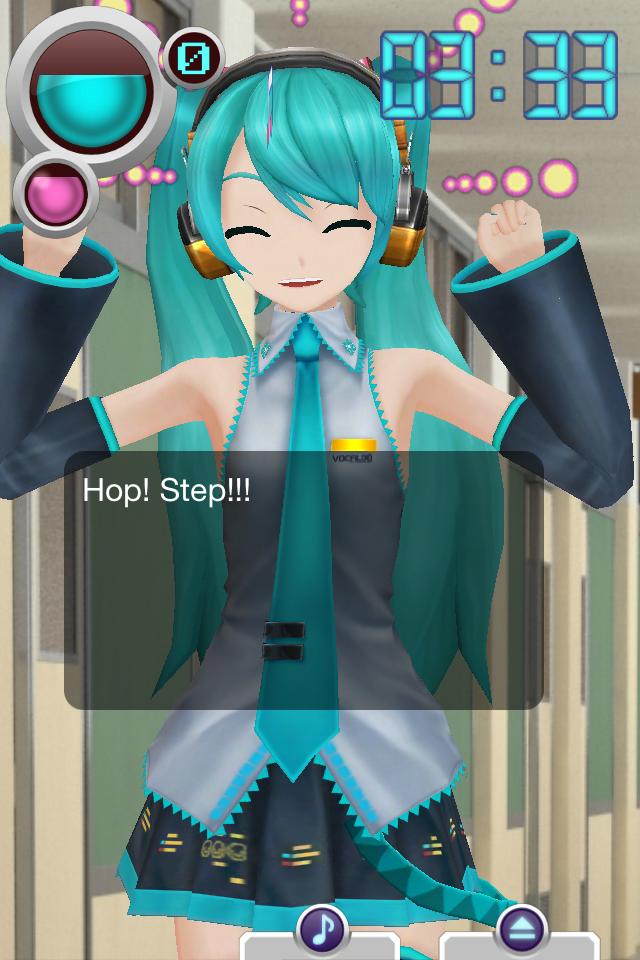 Miku has a plethora of unique poses and moves she uses during the event sequences and each time you can hear her say a little sentence in Japanese in her cutesy schoolgirl voice. Kawaii desu-ne~? 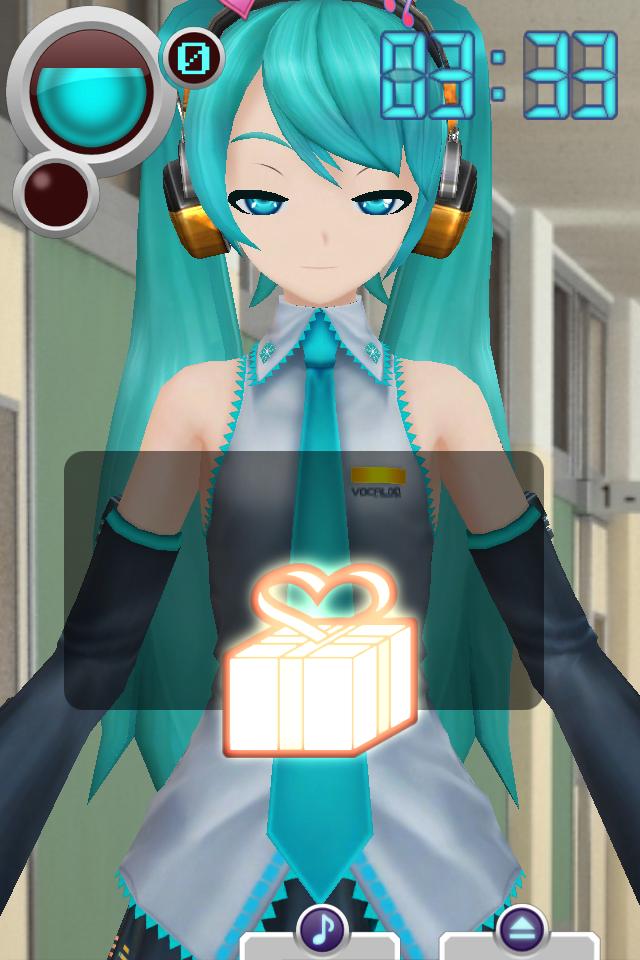 Once you receive a gift from Miku, you can head to the “Items” section under the menu tab, and there you will find all the things she has given you. She can give you anything from a CD of hers, to some food, or perhaps even a wallpaper for your mobile device! This provides the user with some motivation to actually keep listening to music with her. You’ll never know what she might give you! But don’t try to cheat the system. If you leave the music on and start using another app or return to the homescreen, Miku knows you’re not with her and you don’t fill the closeness meter! 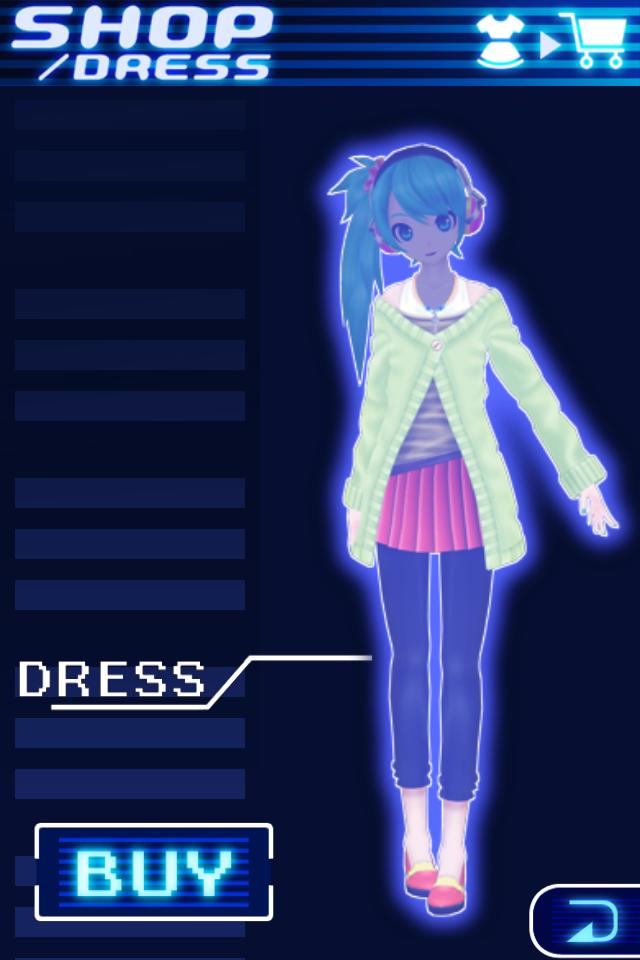 A look into the shop will take you to the list of all the outfits she has available to buy. This one being my personal favorite. It isn’t the dress so much as the side ponytail hairstyle I like, but I don’t have to buy the full set – I could just buy the hair on its own, which is excellent, as the user then has the ability to mix and match different outfits and hairstyles to create a custom look for their Miku. 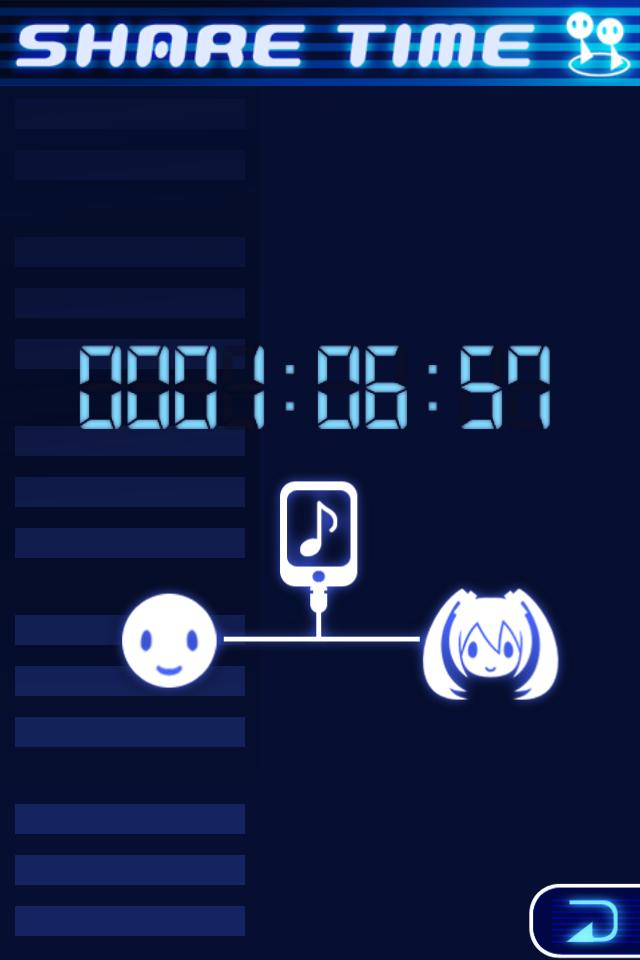 The final thing I would like to show you is the ShareTime feature, which shows you how long you’ve spent with Miku. As you can see, I’ve personally spent over an hour using this app, and I enjoy it very much. I can very much see myself listening to my music with Miku from now on, as it is fun, interesting, engaging, and fluid.

I have tried to load it with as many songs I have and have faced zero issues with it. Moreover, I have tried exiting and entering the app while it was playing, and just after using another, and have not faced any lag issues either – both when transitioning into the app, and while using the app either. Miku reacts in real time and is highly responsive, furthermore the graphics and animations are top notch. 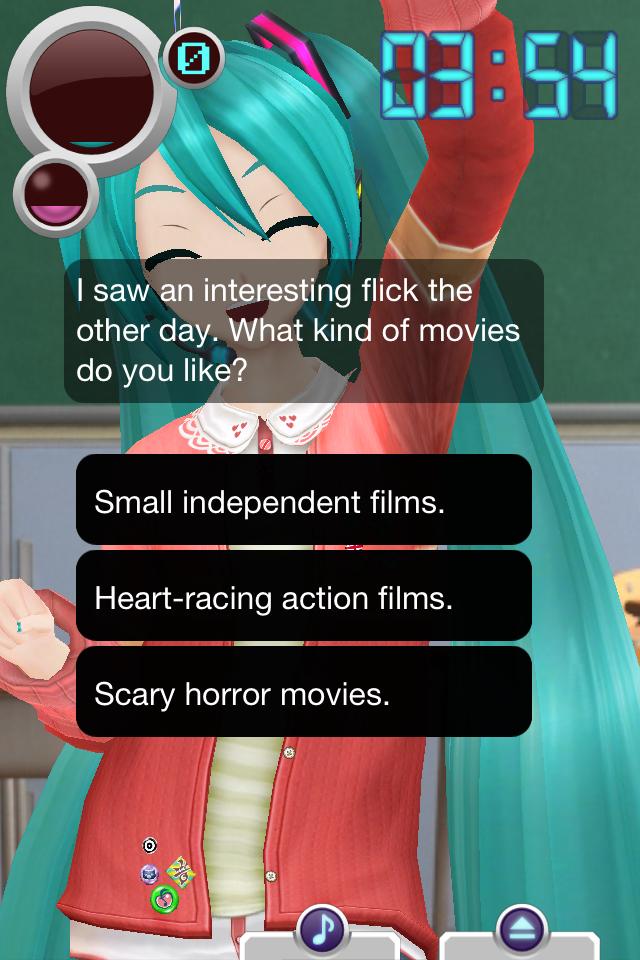 For those who love Miku, Vocaloid, anime, want a fun friend to listen to music with, or are just plain bored with your basic old ordinary music player; Music Girl Hatsune Miku is highly recommended. The app is a little under 30Mb in size and is currently priced at $3.99. Fairly small and cheap for something that completely redefines the way you listen to music. A must have on iPods, as the primary reason for having one is to use it as an mp3 player.