Home Anime Digimon Adventure Tri. To Air on Animax Germany on the 22nd

Animax Germany have revealed that they will be broadcasting the first episode of the Digimon Adventure tri. anime on November 22nd, one day following its release in Japan. 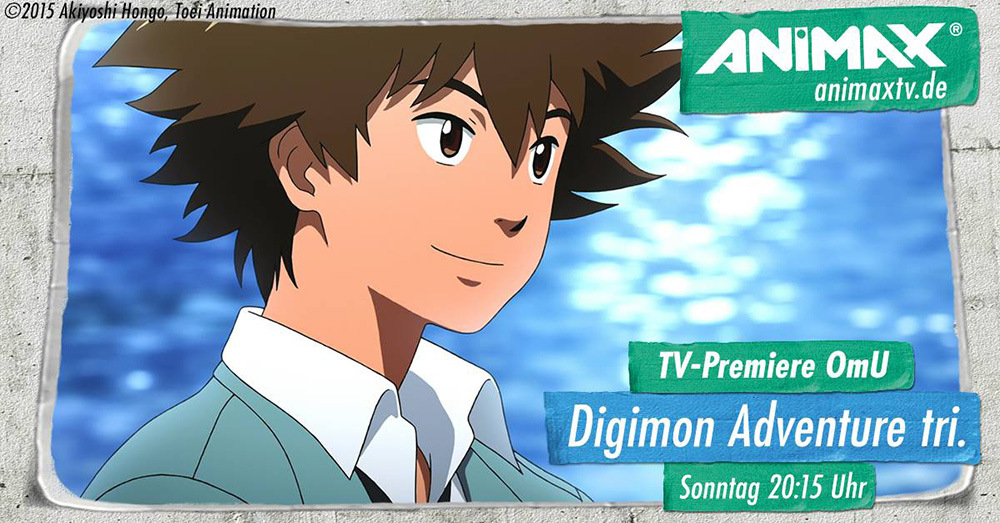 The first episode of Digimon Adventure tri. will air on Animax Japan this Sunday, at 8:15pm CET. The anime has been allocated a 110 minute timeslot and will have Japanese audio and German subtitles. It will only be available to users who have Sky. The episode itself will be out in Japan the day before, Saturday the 21st, in cinemas across the country. The Blu-ray of the anime will be out on December 18.

In addition to this, the first commercial for the upcoming first episode of the 6 part Digimon Adventure tri. series has been aired on Tokyo MX. The new video showcases new footage and designs of the Digidestined of the upcoming sequel, set 6 years after the end of the original Digimon Adventure anime. The video also previews the new rendition of the anime’s main theme, “Butter-fly” by Kouji Wada.

In related news, the Digimon Adventure tri. theatrical anime series has been featured in the December 2015 issue of Animedia as a poster. This issue of Animedia can be purchased here and you can view the other posters that came in this issue here.